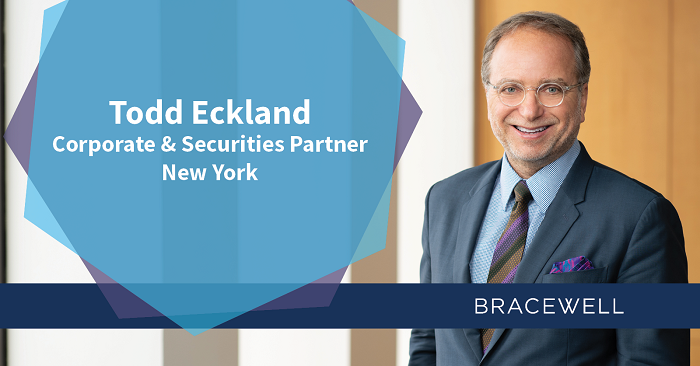 NEW YORK – Bracewell LLP announced today that Todd W. Eckland has joined the firm’s New York office as a partner in the corporate and securities group. Eckland, who was a senior partner and served for over 15 years as co-leader of the securities team at Pillsbury Winthrop Shaw Pittman LLP, is reunited with former Pillsbury colleagues, Catherine Hood and J. Anthony Terrell, who respectively joined Bracewell in June and July.

“Todd is a highly regarded capital markets lawyer, and I’m pleased to welcome him to the firm,” said Bracewell Managing Partner Gregory M. Bopp. “His arrival follows on the heels of Cathy Hood and Tony Terrell. Together, they bring a nationally recognized utilities capital markets practice that deepens our position as a leading energy finance firm.”

Ranked as a top energy finance lawyer by Chambers USA and Chambers Global, Eckland has over 30 years of experience representing investment banks and public and private companies in capital markets transactions. He has represented clients in more than 250 public offerings of debt, equity and hybrid securities across the energy, technology and life science sectors. Eckland also advises on project financings, private placements and strategic investments, as well as corporate governance matters.

“We’re excited to welcome Todd to our growing New York team,” said Daniel S. Connolly, managing partner of Bracewell’s New York office. “Todd’s practice complements the strengths of our energy and finance team, both in New York and throughout the firm.”

Eckland is the ninth veteran lawyer to join Bracewell’s global energy team in the last 18 months. In addition to Hood and Terrell, recent additions include Fernando J. Rodriguez and Nicolai J. Sarad in New York; Nina Howell and Oliver Irwin in London; and Andrej Kormuth and Clint Steyn in Dubai.

“Bracewell is unmatched in the depth of its experience in the energy sector,” said Eckland. “I look forward to once again working with Cathy and Tony, as well as the rest of the Bracewell team, in serving the needs of our clients both in and out of the energy sector.”