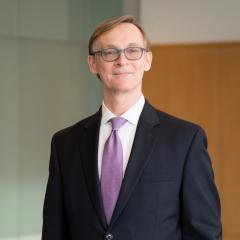 Algonquin Power — long-term back-leverage equity financing to a subsidiary of Abengoa that holds an interest in the Vista Ridge water project under development in San Antonio, Texas, the largest P3 water project in North America

Texas Microgrid, LLC — project financing for the construction and operation of a portfolio of distributed microgrids consisting of ultra-clean natural gas-fired generators within ERCOT service territory

Citibank, N. A. — project financing for an affiliate of Metrus Energy LLC with respect to the installation and maintenance of certain energy efficiency solutions to be installed at properties owned by a leading medical device manufacturer

JP Morgan Securities and Barclays Capital — as underwriters, on the issuance of tax-exempt private activity bonds for the Portsmouth Bypass Project, the first P3 road project in Ohio which also had a TIFIA loan*

Idaho Wind Partners — development, financing and operations of a 183MW portfolio of wind generation projects under contract to Idaho Power

Sacyr Infrastructure USA LLC and John Laing — as shortlisted consortium in its bid for a light rail project under procurement in Miami Beach, Florida

Abengoa Bioenergy — financing of the Hugoton (Kansas) combined cellulosic ethanol production facility and related biomass-fired power plant under a project financing by the Federal Financing Bank guaranteed by the U.S. Department of Energy under the Section 1705 DOE Loan Guaranty program*

Moderator, “Pending Repayments and Nowhere to Refinance: What Are the Options for Corporates to Refinance or Extend Maturities Over the Next Two Years?” Bonds, Loans & Derivatives Brazil 2016 Conference, São Paulo, April 13, 2016.

Moderator, “To What Extent Have Derivatives Become More Important as a Result of Global Market Volatilities, and How Is This Impacting Corporate Financing Activities?” Bonds, Loans & Derivatives Andes 2016 Conference, Bogotá, Columbia, February 23, 2016.

Panelist, “Public-Private Partnerships: Why They Are Created, How They Work and What Happens When They Don’t, Part 1,” March 18, 2015.

In The News
Construction Executive

Investing in Upstream Oil and Gas in Mexico

Bracewell's Mexico team is comprised of leading energy lawyers in Houston and London and we are one of the few law firms that have been involved in all aspects of the liberalisation process.