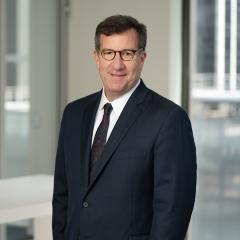 Daniel Connolly is the managing partner of Bracewell's New York office, which he helped launch in 2005 and has since developed into the firm's second largest office. His practice focuses on representing clients in such diverse industries as banking, construction and pharmaceuticals in a wide spectrum of white collar defense and regulatory compliance investigations, as well as bankruptcy, class action and complex commercial litigation cases.

In addition to representing clients in federal and New York State trial and appellate courts, Dan regularly appears before numerous federal departments and agencies, including the U.S. Department of Justice, the Securities and Exchange Commission, the Food and Drug Administration, and the Health and Human Services' Office of Inspector General, as well as various state investigatory and enforcement agencies. He has represented major corporations and senior executives in an array of criminal or regulatory matters and has served as compliance and ethics advisor to companies and boards of directors.

He began his legal career as a prosecutor in the Office of the Manhattan District Attorney, where he served for eight years. During his tenure as an assistant district attorney, Dan tried more than 60 cases to verdict, including homicides and other complex criminal matters, and was involved in the prosecution of a number of controversial cases that garnered significant national attention, including the Tompkins Square riot case. After his time as a prosecutor, Dan served as counsel in the Office of the Mayor of the City of New York. In that capacity, he was responsible for all major litigation undertaken by and against the administration, and serving as a key policy advisor to the mayor.

Midlevel Associates Are Being Reassigned to Feed the Bankruptcy Beast

Daniel Connolly '85, P'18 Reflects on the Role of Lawyers

Crisis Management for Utilities: Lessons Learned from the Pandemic

Closing the Side Door – The Imperative of the College Admission Scandal