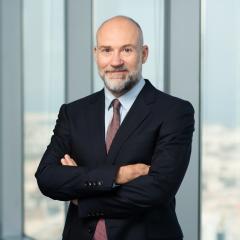 Clint appears as a ranked lawyer in Chambers UAE 2015, which says he “is well respected for his active power-focused practice. He is regularly sought after to advise on renewable energy projects in the region.” Market observers say, “His client service and drafting skills are amazing. He is a consummate professional. For any power project he would be my first point of call.”

Clint Steyn, who is ‘one of the best power and water specialists in the Gulf’
The Legal 500 EMEA, 2017

Fotowatio Renewable Ventures — development of a 34 MW/ 68 MWh utility scale battery storage project, to be constructed and operated by Tesla in the United Kingdom

Alcazar Energy Partners — all aspects of the establishment of a renewable energy investment company in Dubai and the completion of their first round of funding with the International Finance Corporation, Mubadala Infrastructure Partners Limited, Dash Ventures and Alcazar Renewable Energy as shareholders

Arabia Power Company — all aspects of the restructuring of the Umm Al Nar power and water desalination project in Abu Dhabi, UAE

Arabia One For Clean Energy Investments (a project company formed by Hanwha Engineering & Construction Corporation, Ennera Energy and Arabia Trading and Consulting Company) — project development and financing of the Arabia One project, one of seven solar photovoltaic (PV) projects in Jordan (called the “Seven Sisters”) being procured in Round 1 of Jordan’s renewable energy program; named “Middle East Renewable Deal of the Year, 2014” and “Middle East Overall Project of the Year, 2014” by IJGlobal Middle East

Regional utility — acquisition of a renewable energy project in the U.S.

Egypt's renewable Feed In Tariff (FiT) continues to take shape, albeit at a slightly reduced speed than expected earlier. Happily, the additional time appears to be being used to respond to constructive comments from developers and other stakeholders. It is also expected that some clarifications will be issued in writing. Developers are reporting that up to now many details are only emerging verbally in face to face meetings, which many have found somewhat frustrating. Details therefore remain sketchy, but indications are that EgyptERA is planning in the next week to issue guidelines that...

The Government of Egypt has said that Egypt must invest US$12 billion in the electricity sector over the next five years in order to meet that country's urgent electricity demands. Renewable power - both solar and wind - will be a key part of this initiative. Egypt plans up to 2,300 MW of solar and up to 2,000 MW of wind generation in the first regulatory period. This will include 2,000 MW of Solar PV from 500 kW up to 50 MW, 300 MW of Solar PV Projects below 500 kW and 2,000 MW of wind generation. The first regulatory period will end when these targets are met, or after 2 years, whichever is...