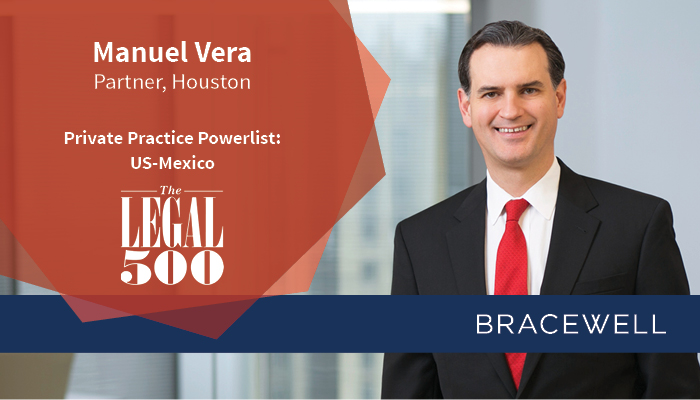 HOUSTON – Bracewell LLP is pleased to announce that Partner Manuel Vera has been named to The Legal 500 Private Practice Powerlist: US-Mexico, published by Legalease. The Powerlist highlights the leading US-based private practice lawyers who have earned a strong reputation for their high-profile work and engagement in the Mexican market.

Vera’s recent notable work in Mexico includes advising Cheiron Petroleum Group in the closing of a financing to acquire a 50 percent interest in onshore fields in Mexico. The deal marked the first upstream debt transaction for an independent oil and gas company in the newly deregulated Mexican market. In addition to being a landmark closing, the transaction played a leading role in Bracewell being shortlisted for the Transatlantic Finance Team of the Year at the upcoming Transatlantic Legal Awards.

He was also part of a Bracewell team representing Crédit Agricole Corporate & Investment Bank as lead arranger in connection with the financing of McDermott International, Inc.’s all-stock combination with Chicago Bridge & Iron Company N.V. This deal team managed foreign counsel in a number of jurisdictions, including Mexico, Colombia, Curaçao and Panama. The transaction closed on May 10, 2018, with an enterprise value of approximately $6 billion.

A lawyer licensed in Mexico, Vera is furthermore representing Kinder Morgan, Inc. in a cross-border natural gas pipeline for the transportation of gas into Mexico. Additionally, Vera is advising clients with respect to the new power market in Mexico and the development of offshore oil and gas blocks in the Gulf of Mexico, including potential farm-ins and farm-outs.

Now in its second year, The Legal 500 Private Practice Powerlist: US-Mexico is based on feedback received from hundreds of senior counsel in the United States and Mexico, as well as market intelligence from Legal 500’s US and Latin America research teams.