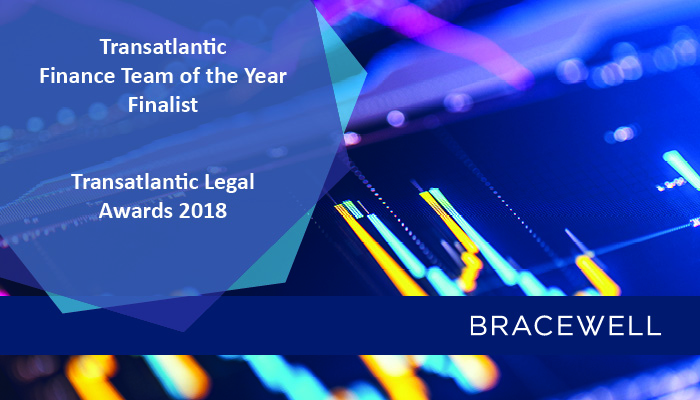 LONDON – Bracewell (UK) LLP has been shortlisted for the Transatlantic Finance Team of the Year award at the upcoming Transatlantic Legal Awards. The winners will be announced at a gala dinner in London on June 14, 2018.

Bracewell being named a finalist is due in large part for advising Cheiron Petroleum Group in the closing of a financing to acquire a 50 percent interest in onshore fields in Mexico. The transaction marked the first upstream debt transaction for an independent oil and gas company in the newly deregulated Mexican market. In addition to being a landmark deal, the bridge financing was done on an expedited timetable.

Jaine Miller, the General Counsel of the PICO Cheiron Group commented: “We are indeed privileged to have worked with Jason Fox and his Bracewell team on this landmark transatlantic deal and were impressed not just with the quality of the work, the accessibility and response time of the team members across the jurisdictions at all time zone hours but also the breath-taking speed within which the entire transaction was achieved.”

Founded in 2015, the Transatlantic Legal Awards recognize excellence in legal innovation and strategy with respect to transatlantic corporate, finance and litigation matters.