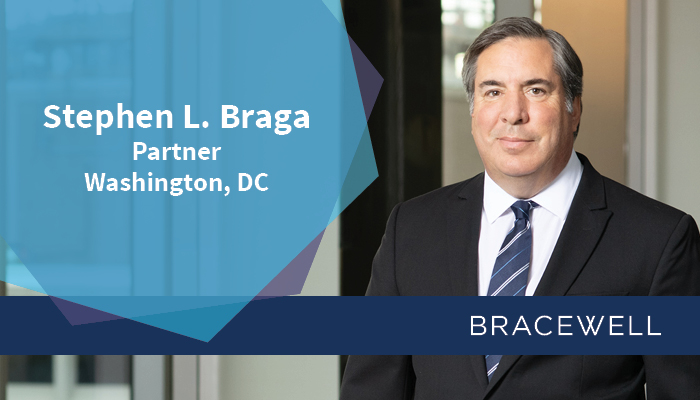 WASHINGTON, DC – Bracewell LLP announced today that Stephen L. Braga has joined the firm’s Washington, DC office as a partner to lead the firm’s white collar defense practice. Braga currently is a professor of law at the University of Virginia School of Law, where he teaches white collar criminal defense and serves as the director of the Appellate Litigation Clinic.

“Steve is a highly credentialed and accomplished white collar defense and trial lawyer,” said Bracewell Managing Partner Gregory M. Bopp. “Our clients will benefit from his distinguished record of success in white collar and other complex litigation matters. We are delighted to welcome him to the firm.”

Braga has over 35 years of experience representing clients in white collar, appellate and civil litigation matters. He has played a leading role in many high-profile white collar cases and investigations in DC over the course of his career, including defending public relations executive Michael Scanlon in the Jack Abramoff lobbying scandal and defending ABC and Chris Wallace at trial against defamation claims arising from a “Primetime Live” news broadcast. Other career highlights include securing the release in two separate high-profile representations of men who had spent decades in prison for wrongful murder convictions: the Marty Tankleff and West Memphis 3 cases.

Braga is the most recent partner to join Bracewell’s DC office to strengthen the firm’s bench in complex litigation and regulatory issues emerging from Washington. David A. Super joined the firm in July 2017 to head the office’s civil litigation practice. Robert J. Wagman Jr. and Angela B. Styles respectively joined in March 2017 and October 2017 to establish a government contracts practice. Paul F. Wight was hired as a partner in the energy regulatory group in October 2017, and Hans P. Dyke joined in April 2017 as a partner in the energy projects group. In September 2018, Ann D. Navaro joined the environmental strategies group.

“I’ve known Steve since 2001. He’s universally held in the highest regard, both as a practitioner and a colleague. I welcome the opportunity to work with him again,” said Mark K. Lewis, managing partner of Bracewell’s Washington, DC office and a member of the firm’s management committee.

“Steve’s arrival expands the national reach of Bracewell’s white collar practice. He will anchor our practice in DC, and he will team well with our additions of former US District Court Judge Barbara S. Jones and Paul Shechtman in New York,” said Stephen B. Crain, chair of Bracewell’s litigation section and management committee member.

Braga clerked for the Honorable Thomas A. Flannery of the US District Court for the District of Columbia immediately after graduating from the Georgetown University Law Center. Braga then began his private practice career at Miller, Cassidy, Lewin & Larroca LLP, one of Washington, DC’s pre-eminent litigation boutiques firms until its merger with Baker Botts LLP in 2001. While at Miller Cassidy, he rose to become one of the firm’s managing partners. He was a partner at Baker Botts until 2008, when he joined Ropes & Gray LLP. In 2013, Braga joined the law faculty at the University of Virginia, teaching courses in white collar criminal defense, appellate litigation and civil litigation while also maintaining a white collar criminal defense practice.

“I have worked with a number of the Bracewell partners over the years,” said Braga. “I’m looking forward to working with those old friends and my new Bracewell colleagues in growing a white collar practice in DC that builds on the firm’s leading white collar and trial practices in New York, Texas and Seattle.”

Braga initially joins Bracewell on part-time basis. He will become a full-time partner on June 1, 2019, after completing his teaching obligations at UVA Law.