On May 17, 2019, Florida Governor Ron DeSantis signed into law SB 7068 (the “Bill”), directing the Florida Department of Transportation (“FDOT”) to create a program of “Corridors of Regional Significance”. Spearheaded by Senate President Bill Galvano (R-Bradenton), the Bill passed in the Senate with a 37-1 vote on April 24, and the Florida House affirmed the Bill with a vote of 76-36 on May 1.

The program’s immediate purpose is to create three tolled roadways in Florida: the Suncoast Connector running from Citrus County to Jefferson County; the Northern Turnpike Connector, which would extend northwest from the Florida Turnpike connecting to the new Suncoast Parkway; and the Southwest-Central Connector, proposed to run from Collier County to Polk County. In addition, the Bill includes an ambitious goal to potentially accommodate within such corridors multiple modes of transportation (such as freight and passenger rail and transit, and – eventually -- autonomous vehicles) and multiple types of other infrastructure, including broadband, water and sewer connectivity, and energy distribution. 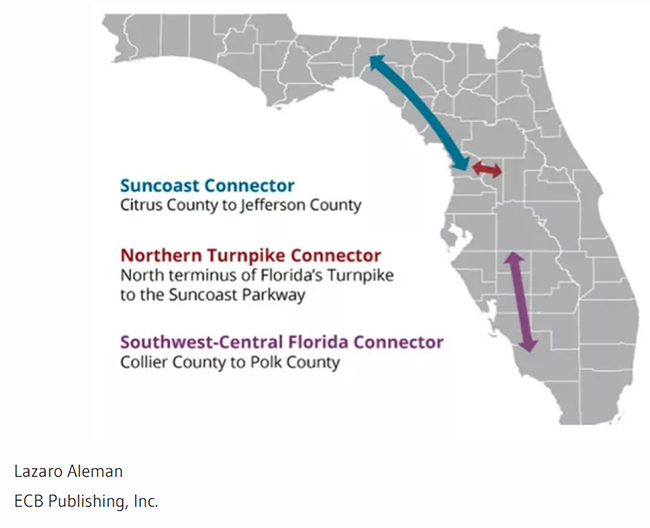 The Bill met with much criticism from environmental groups who contend the corridors will threaten waterways, the Everglades, small towns and endangered species habitat. 1000 Friends of Florida, an Environmental group named in the Bill as a prospective stakeholder to be appointed to one of the taskforces described below, believes the roads will endanger and misuse some of Florida’s limited undeveloped land. In contrast, there are numerous proponents of the roads who feel the new expressways will provide much needed emergency evacuation routes to Northwest Florida, which currently has limited large-scale evacuation corridors. Proponents also believe the roads will bring economic growth to a largely rural area of the state. In addition, the roads are expected to ease congestion around the more populous areas of western Florida, including Naples and Tallahassee.

The new M-CORES law provides a procedure and timeline for the planning and construction phases of the project, with a view to building as much consensus as possible as to the need for each of the roadways. Before commencing any of the three projects, FDOT is first required to create separate task forces to assess each of the proposed corridors, which FDOT timely did on August 1 of this year. These ‘consensus-building’ task forces include, as required, representatives from relevant Florida government departments (Environmental Protection, Economic Opportunity, Education, Health, Agriculture and Consumer Services and the Fish and Wildlife Conservation Commission), local water management districts, local government officials, metropolitan planning organizations, regional planning councils, the community, and appropriate environmental groups.

As indicated above, FDOT (and each task force) must consider, as part of the development of each project, the potential co-location or accommodation of other infrastructure projects or modes of transportation within each project. This could include, for instance, installing broadband lines or building rail facilities within the rights of way, installing new water connections, improving resources impacted by the road, creating evacuation systems, or adopting specific environmental protection measures, or a combination of the above.

The recommendations of each task force must be followed by FDOT in the construction phase of each project to “the maximum extent possible”.

FDOT must share the report and project alignments with each relevant local government for review to ensure that any interchange located in its territory contains appropriate land and natural resource protections and to determine whether its local comprehensive transportation plan needs to be reviewed accordingly.

Funding for these toll roads is contemplated to come from a number of sources, including turnpike revenue bonds, right-of-way and bridge construction bonds, financing by the FDOT Financing Corporation, and advances from the State Transportation Trust Fund or public-private-partnerships. Note that Florida’s public-private partnership statute expressly permits the creation of new toll facilities and the imposition of tolls by private entities.

The Bill requires that toll revenue from the turnpike system be used to repay advances from the State Transportation Fund, to the extent not required to service debt in the form of bonds, pay for operation and maintenance, other contractual obligations, or other system improvement project costs. It should be noted that, pursuant to Florida’s P3 statute, FDOT is mandated to include in their P3 contracts provisions whereby “a negotiated portion of revenues from tolled or fare generating projects are returned to the department over the life of the public-private partnership agreement”.

It is early days to know what FDOT and the task-forces will recommend for each corridor, but the new statute opens the door to potentially bringing to the market as P3s three new toll roads, plus additional infrastructure (for instance, rail or broadband), seemingly in the near future. Assuming any or all of them proceed,  FDOT appears to have ample leeway under the legislation to decide which P3 model to use for each project. Since Florida’s P3 statute authorizes the development of new roads as toll roads or under performance-based availability payment structures, the new M-CORES projects could in principle be procured as either demand-risk projects with a toll revenue share and state control over toll rate increases, or as availability-payment projects payable from state funds with the state retaining the toll revenue.

In any event, the new law opens the door to the development of new infrastructure to be paid for at least partially with user fees. The use of task forces and the broad outreach promoted by the new law show that the State authorities recognize the value of stakeholders’ support to the success of any toll road project, especially if it is decides to procure such projects as P3s. If the process is handled transparently and fairly, it will reduce the risk of legal challenges from any continuing detractors, and maximize investor interest in the new projects.

On June 13 the Governor signed HB 311: Autonomous Vehicles, which promotes the testing and development of self-driving vehicles on Florida’s roads. The Bill began in mid-January 2019 in the House, and soon passed with unanimous support in both the House and Senate. The new law intends to make Florida an attractive location for developers of self-driving technology, by limiting the permits and governmental oversight required, in contrast to the other hotbed of driverless technology development, California. Notably, the bill does not require companies testing self-driving cars to have state inspections, certifications, or a human safety driver in the vehicles. As unnerving as this sounds, Florida is the third state to do this, and the human-driver exception would apply only to Level 4 and Level 5 autonomous vehicles. SAE International standards define Level 4 autonomous vehicles to be highly automated, requiring only limited input from the driver in predefined road types or geographic areas; in new locations or on new roads, driver input is needed. Level 5 autonomous vehicles are defined to be fully automated, capable of any driving task that a human is capable of, although human input is necessary for entering a destination. Both Level 4 and Level 5 autonomous vehicles are in the initial testing stages of development.

The legislation also specifically allows the Florida Turnpike Enterprise (FTE) to contract directly with private Autonomous Vehicle developers. Gov. DeSantis further articulated Florida’s goals as follows: “Florida officially has an open-door policy to autonomous vehicle companies, and I encourage them to the relocate from California to Florida”. One California-based company, Starsky Robotics, already has plans in place to deploy a fleet of driverless trucks in Florida by the end of 2020. Governor DeSantis signed the landmark legislation at SunTrax, a national transportation research and development facility, which officials hope will become a leader in the southeast thanks to the new legislation.

Autonomous vehicles are no longer a matter of science-fiction and we may soon see the arrival of proven technologies permitting people to use safe and efficient self-driving vehicles on our roadways. Florida wants to be at the forefront of these developments.

We look forward to the M-CORES bill’s implementation and to seeing new P3 road procurements in Florida, and remain optimistic about additional developments in the use of autonomous vehicles in the near future.

This article was written with the assistance of NY Summer Associate William Ladd.