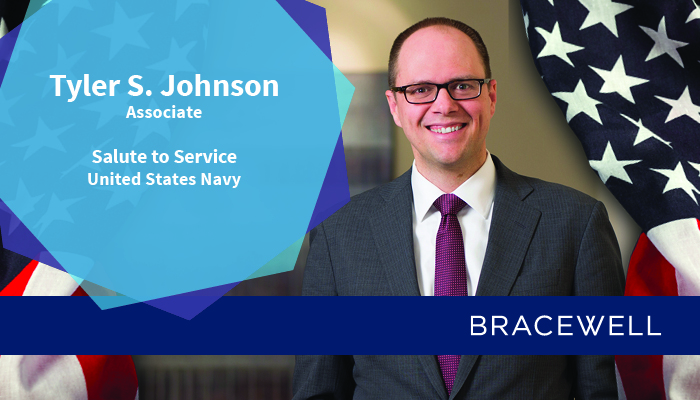 In a week-long Salute to Service, Bracewell continues its series of stories from across the various sectors of military life.

Spending 87 consecutive days operating a nuclear power plant sounds daunting in itself. What if we told you Bracewell Associate Ty Johnson did just that while submerged in water?

No, this is not a modern-day Harry Houdini stunt or something out of a science fiction novel. Ty served as a US Naval officer aboard the USS Louisville (SSN 724), a nuclear-powered, Los Angeles-class submarine based out of Pearl Harbor, Hawaii. His duties included operating the nuclear power plant onboard and conducting ship-board operations.

“Our longest stretch under water was 87 days,” said Ty. “We pretty much ran out of food towards the end. I lost about 10 or 15 pounds, and I didn’t have much to lose on me to begin with. It was a good bit of weight drop, but it was all worth it. I loved my time in the Navy.” 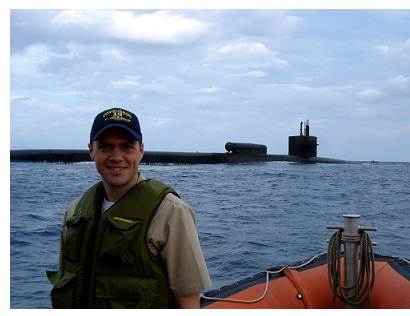 Ty says most people he talks with about his Navy days want to hear about life aboard a submarine. Questions vary, from how did you do laundry? What did you eat? Where did you store things?

“A Los Angeles-class submarine has a maximum 90-day stay time underwater since it is limited by the amount of food the sub can carry,” explained Ty. “There were about 170 sailors when I was aboard. That’s a lot of food needed. We would typically stack up food on the decking. You basically ate your way down to the original deck level.”

Submarines typically deploy for six months every year-and-a-half. Ty deployed on the Louisville in 2002 for operations in the western Pacific before being called to the Red Sea in the winter 2003. After a month in the Red Sea, the Louisville was ordered to launch 16 Tomahawk missiles against targets in Iraq. The “shock and awe” campaign in the opening days of Operation Iraqi Freedom had begun. Ty and the Louisville’s deployment was extended to nearly nine months in support of the campaign. The Louisville and its crew were awarded the Navy Unit Commendation for their role in the operation.

Ty was on the Louisville for almost three years and moved to the Pacific Northwest in January 2005 to do a tour at the Naval Base Kitsap located on the Kitsap Peninsula in Washington State.

Before any of these deployments and tours, Ty went through nearly two years of training before joining the crew of the Louisville. Most his studies were nuclear power related. Ty, who joined the Navy in 1999 and started officer candidate school in 2000, studied nuclear physics, thermodynamics, electrical theory, radiation theory, chemistry and an abundance of math.

“The Navy’s nuclear power program is one of the most academically stringent, rigorous program in the entire military,” stated Ty.

This education not only prepared him for his service in the Navy, but also laid the groundwork for his career as a power regulatory lawyer.

“When I came aboard the submarine, I had to use all I had learned to understand the nuclear plant on the sub, the propulsion systems and the power distribution systems,” explained Ty. “The sub operated like its own little power station. The nuclear plant not only provided the steam that drove the main turbines, but also provided the steam that ran large turbine generators that produce the electricity to run the pumps, the air conditioning and everything else onboard.”

For Ty, this was a hands-on introduction to the operation of a power plant. Now with Bracewell, Ty deals with the regulatory side of transmission systems and the moving of power across interstate lines.

“My experience on the Louisville gave me a great primer for understanding how the larger transmission systems work in the US,” added Ty. “It was a leg-up in wading into the very technical world of an electricity regulation lawyer.”

In 2007, following seven years in the Navy, Ty enrolled in law school to become an energy regulatory lawyer. The energy regulatory world was a natural fit to build upon Ty’s technical background with the nuclear Navy.

“If you asked me if I was going to be a lawyer when I graduated from college, I would say you were crazy,” Ty said with a laugh. “But after my seven years in the Navy, I was really looking for a professional field to get into and law seemed like a good fit.”

“I regularly look back upon my Navy days when reviewing a new transmission issue, utility proposal or federal agency proposal,” said Ty.