Adam Blythe has long wanted to run the marathon in the city he has called home for 14 years. On April 28, Adam finally got his opportunity by running in the 39th Virgin Money London Marathon. 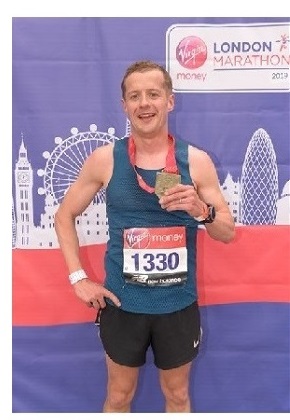 Adam finished with a personal-best time of 2:28:08. To put that into perspective, Kenyan long-distance runner and Olympic marathoner Eliud Kipchoge surpassed his own London course record with a winning time of 2:02:37.

Adam placed 54th overall in a race where more than 42,000 runners crossed the finish line.

“I have long wanted to do a sub two-thirty marathon,” said Adam. “I have never managed that before.”

London was Adam’s fourth marathon. He completed courses in Bournemouth and Abingdon in the UK, as well as the Paris marathon. Adam began his training for the London race on December 24, 2018, logging somewhere between 80 to 100 miles a week. He ran seven days a week when work and family commitments permitted.

“Ideally, I run in the mornings because that’s the easiest timewise to try and keep free,” explained Adam. “I also know better that I’m not going to have a work conflict or something come up.”

He has always been a keen runner. Adam grew up in the Cotswolds, a rural part of southwest England near Worcester, where he participated in track and field at Prince Henry’s High School. His dad was also a runner and his 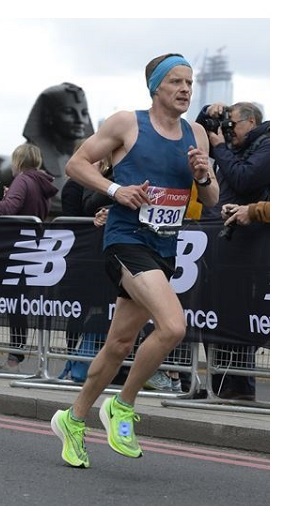 sister still runs from time to time, but as Adam tells “more for fun rather than to compete or to do races.”

Adam does not always run competitively either. He also uses it as an opportunity to “escape” and as “a stress buster.” Running has become part of his habitual routine.

“I do it as part of my commute to work,” Adam expounded. “I won’t always do both ways, but I usually do one way.”

His commuter runs can be anywhere from six miles to up to 15 miles, depending on the route he takes and if he is training.

Adam displays the same discipline in his practice as he does in his running regime. Elected a partner in 2018, he was the first “homegrown” partner in Bracewell’s London office. Adam’s practice focuses on oil and gas related transactions, and he has been recognized by The Legal 500 United Kingdom as a Next Generation Lawyer for Oil & Gas Projects since 2017. He has also been recommended for Projects in the 2017 and 2019 editions of the IFLR1000 Financial & Corporate Guide.

While most walk before they run, Adam will be doing the opposite. Next up for him will be a 100 kilometer walk in June around the Jurassic Coast in South West of England with his family to raise money for the hospice that recently cared for his mom.

From courses to contracts, Adam continues to run the good race on all fronts.