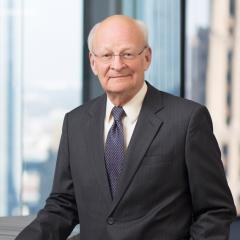 Robert (Bob) Clarke is the founder of Bracewell’s global financial services practice and continues as a retired partner to serve as of counsel to the firm. Bob’s principal areas of practice include assisting banks in matters involving state and federal banking laws, regulations and compliance with requirements of supervisory agencies, including the management of regulatory risk in day-to-day operations, mergers, acquisitions and strategic planning. He also provides independent counsel to boards of directors, advice on new financial services products and litigation support as an expert witness.

Bob was appointed by President Ronald Reagan as United States Comptroller of the Currency and was reappointed to the position by President George H. W. Bush. He served as comptroller from December 1985 through February 1992, supervising approximately 5,000 nationally chartered commercial banks which accounted for approximately two-thirds of the assets of the U.S. commercial banking system.

Following his government service, Bob returned to Bracewell. Among his practice activities, he advised the governments of Hungary, Argentina, Brazil, Mexico, Latvia, Romania, Kazakhstan and Hong Kong on bank supervisory operations. He also served as a consultant to the World Bank and as senior adviser to the President of the National Bank of Poland. From 2004 until December 31, 2015, Bob served as a member of the board of directors of the Dubai Financial Services Authority, overseeing operations of financial services providers licensed and operating in the Dubai International Financial Centre. He continues to serve as an advisor to the DFSA.