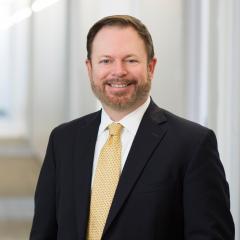 Matt Paulson represents companies in the oil and gas, refining, power and chemical manufacturing industries on environmental matters, including strategic permitting, regulatory compliance, investigations, enforcement and civil and appellate litigation. His work includes advising clients on issues arising under all of the major federal environmental laws and their state counterparts. Matt regularly advises clients at the early project planning stages, assisting with scoping a broad array of regulatory and permitting requirements across all media and disciplines, from air, water and waste permitting, endangered species and cultural resource reviews and approvals, and US Coast Guard and Federal Aviation Administration authorizations, to land use, local registration and licensing obligations, as well as other federal, state, and local requirements that can affect project timing and viability. Matt also provides assistance on crisis management and prevention, including responding to major accidents, conducting internal investigations associated with allegations of criminal and civil wrongdoing, preparing risk management, emergency response and business continuity plans, and preparing for inspections by regulatory authorities.

Clients praise him for being ‘responsive, with a depth of expertise and a good ability to tee up key items for focus.’
Chambers USA, 2019

LNG export company — strategic counseling on state and federal environmental authorizations associated with construction and operation of export facilities and associated infrastructure, including pipelines and compressor stations in Texas

TC Energy Corporation — approximately $1.275 billion sale of US midstream assets held by its subsidiary, Columbia Midstream Group, to a subsidiary of UGI Corporation

LNG export company — strategic counseling on state and federal environmental authorizations associated with construction and operation of export facilities and associated infrastructure, including pipelines and compressor stations in Louisiana

“Misinterpreting Machiavelli? Where the Ends and the Means Collide with Sound Law, Science And Policy: The Impacts of EPA’s Ozone NAAQS Revision on the Midstream Oil and Gas Industry,” The Institute for Energy Law’s Midstream Oil & Gas Law Conference, Houston, December 3, 2015.

TCEQ to Use Discretion in Enforcing Rules Amid Pandemic

In The News
PROCESSING

At a September 24, 2020 Work Session, TCEQ Executive Director Toby Baker sought approval from the TCEQ Commissioners to propose changes to the TCEQ’s Penalty Policy (RG-253) that will give the agency discretion to significantly increase administrative penalties for...

In his first week in office, President Trump has signed several Presidential Memoranda and Executive Orders aimed at encouraging domestic infrastructure development. Many of these executive...

The presentation provided guidance on developing a corporate culture attuned to process safety and on continuing to assess and adjust over time. It also discussed the legal issues that can arise from adopting an environmental management system, particularly with regard to how...

The U.S. Chemical Safety and Hazard Investigation Board (“CSB”) released its Strategic Plan for 2017-2021 today. The Strategic Plan is the result of 18 months of staff and stakeholder development and review. The plan serves as a blueprint for the CSB’s investigative...

On October 3, 2016, the Pipeline and Hazardous Materials Safety Administration (PHMSA) announced an Interim Final Rule (IFR) establishing when and how it will issue Emergency Orders to address imminent safety hazards across the oil and gas pipeline industry. See Pipeline Safety: Enhanced Emergency Order Procedures (Docket No. PHMSA-2016-0091). The new procedure allows PHMSA to impose restrictions, prohibitions, and safety measures without prior notice or an opportunity for a hearing. These measures can apply through all or part of the industry, not just to individual facilities or operators...

TSCA Reform: A Work in Progress

On February 25, 2016, EPA released a pre-publication version of its much anticipated amendments to the agency's Risk Management Program (RMP) regulations. The proposal, which follows EPA's 2014 Request for Information, would impose significant changes to existing prevention program, emergency response preparedness, and information availability requirements, without furthering the program's goal of accident prevention and release detection. Proposed Changes to Incident Investigation Requirements Would Significantly Increase the Number and Type of Incidents that Require Investigation With No...

EPA’S RMP Rule Making: How Bad Could it Really Be?

Paulson to Speak on Air Quality at Superconference

Matt Paulson to Speak on RMP at AIChE Spring Conference