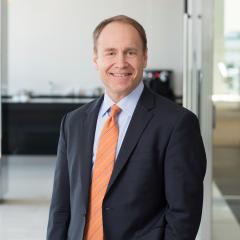 Jeff Holmstead, former assistant administrator of the United States Environmental Protection Agency for Air and Radiation, is one of the nation’s leading climate change lawyers as recognized by Chambers USA (2008-2021) and heads the Environmental Strategies Group at Bracewell. The Environmental Strategies Group is a multi-disciplinary group that includes environmental and energy attorneys, public policy advocates and strategic communications experts – most of whom have had high-level government experience. Under Jeff’s leadership, they work together on a daily basis to advise and defend companies and business groups confronting major environmental and energy-development challenges, both domestically and globally.

From his time in both the government and the private sector, Jeff is very familiar with the environmental and energy challenges facing the business community. He advises clients dealing with an increasingly complex regulatory, legal and public relations landscape, drawing on his experience in policy development, administrative and legislative advocacy, litigation and strategic communications. He has worked with clients in a number of industries on issues related to climate change, Clean Air Act policy and enforcement, and energy policy — including the development of new coal-fired power plants, refineries, renewable energy sources, and electric transmission infrastructure.

Jeff headed the EPA’s Office of Air and Radiation from 2001 to 2005, longer than anyone in EPA history. During his tenure, he was the architect of several of the agency’s most important initiatives, including the Clean Air Interstate Rule, the Clean Air Diesel Rule, the Mercury Rule for power plants and the reform of the New Source Review program. He also oversaw the development of the Bush Administration’s Clear Skies Legislation and key parts of its Global Climate Change Initiative. Between 1989 and 1993, Jeff served on the White House Staff as Associate Counsel to former President George H.W. Bush. In that capacity, he was involved in the passage of the Clean Air Act Amendments of 1990 and the key steps taken to implement those amendments. From 1987 to 1988, he served as a law clerk to Judge Douglas H. Ginsburg on the U.S. Court of Appeals for the District of Columbia.

His understanding of the EPA is unparalleled. His collaborative approach to issues is fantastic.” “He’s brilliant...he’s widely respected across the industry.
Chambers USA, 2021

How Biden Could Close Coal Plants Without CO2 Regulations

Biden ‘Over-Promised and Under-Delivered’ on Climate. Now, Trouble Looms in 2022.

Biden Has No EPA Air Nominee as Climate Goals Teeter

The Supreme Court Will Hear Challenges to the EPA’s Climate Authority. Here’s What to Know.

EPA Forges Ahead on Power Plant Rule Amid Legal Showdown

What the Fight Over EPA Chief Says About Democratic Divisions

US to Formally Abandon Paris Climate Deal, for Now

How a Biden Administration Could Reverse Trump’s Climate Legacy

January 21, 2020 In The News Washington Examiner

In bid to speed up EPA, Pruitt takes on entrenched air pollution system

What's ahead in 2018? Houston business likely to grow, not boom

January 1, 2018 In The News Houston Chronicle

E.P.A. Says It Will Write a New Carbon Rule, but No One Can Say When

U.S. firm on withdrawing from Paris Accord

Trump's Team Is Split Over the Paris Agreement

Analysis | Rick Perry asked for a boring, wonky study of the grid. Even that was controversial.

January 9, 2017 In The News Environmental Law Reporter, The

December 15, 2016 In The News Bloomberg Businessweek

Obama Climate Plan, Now in Court, May Hinge on Error in 1990 Law

What Happens to the Clean Power Plan Under Clinton or Trump?

A former air chief's warning about the EPA

December 18, 2015 In The News Wall Street Journal Online, The

August 3, 2015 In The News Sentinel republic

Inside the fight against Obama's climate plan

Why people love to hate the EPA's climate rules | WashingtonExaminer.com

January 9, 2015 In The News StateImpact Oklahoma

Ozone Rules Could Set Off Fight Between Environmental, Economic Interests

What the U.S. Needs to Do to Meet New Climate Commitment

November 6, 2014 In The News Construction.com

EPA's Powers Upheld by Court With Climate Rules on Deck

For EPA's Global Warming Rules, Will 'Next Year' Mean 'Never'?

In midst of The Big Freeze, Obama to exert presidential powers on ‘global warming'

New power plant rule hasn't been published in Federal Register -- but does it matter?

Businesses Wary as Obama Picks Get Edge in Senate Rules

October 1, 2013 In The News National Journal

The social cost of carbon is on the rise

Why the EPA might delay its carbon rules for power plants

IP, Energy Laterals Will Be Hot Commodities In 2013

Under the Sea: Congress Amends OCSLA to Provide for Offshore CCS

The Future of Carbon Capture, Utilization and Storage Projects

Climate Change on Every Menu

The Next Four Years: What Will the Clean Air Act Bring?

FAQ: Reversal of "Once In Always In"

On February 8, 2018, ERM and Bracewell presented a webinar that took a look at the legal and technical issues related to EPA’s January 25th memo reversing the long standing “Once In Always In” policy. With this policy change, facilities that are able to be permitted as “area sources” under Section 112 of the Clean Air Act will generally be able to reduce the burden of paperwork, monitoring, recordkeeping and reporting requirements and comply with air quality requirements with greater certainty and less headache.

Click here to view a recording of the webinar.

On February 14, Environmental Strategies Partner Jeff Holmstead testified before the House Committee on Energy and Commerce on the need to reform EPA’s New Source Review (NSR) program. As the former head of EPA’s Air Office, Holmstead argues that thoughtful reform can preserve the benefits of the NSR program while substantially reducing the burden that it imposes on U.S. industry.

The Trump effect on energy and environment law, manufacturing — an E&E News and ABA presentation

2016 Election: Outlook for the Clean Power Plan and Other Environmental Issues

Webinar: The Future of Carbon Capture, Utilization and Storage Projects

Holmstead to Speak at the Hudson Institute

Holmstead a Panelist at Energy and Environmental Policy Landscape: Charting the Course for the Southeast Electricity Sector