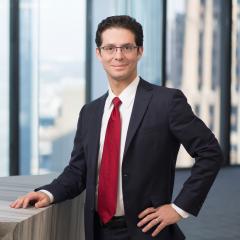 Prior to joining Bracewell, Jason served as a law clerk to the Honorable Marvin Isgur of the United States Bankruptcy Court for the Southern District of Texas. Jason has received numerous recognitions for outstanding representation of clients, and most recently was named a Rising Star in Restructuring and Insolvency (IFLR1000 Financial & Corporate and M&A Guide, 2016-2023) and one of the “Best Lawyers in America: Bankruptcy and Creditor Debtor Rights” (BL Rankings, Best Lawyers, 2019-2023).

Wells Fargo, N.A — restructuring of a $1 billion secured revolving credit facility, with an initial borrowing base of $475 million, to Pinedale Energy Partners, LLC, to finance the acquisition of oil and gas properties in Wyoming and for general corporate purposes, as lender and administrative agent

Echo Energy Partners I, LLC — Chapter 11 bankruptcy case, whereby it sold substantially all of its SCOOP/Stack assets to HPS Investment Partners LLC via section 363 for approximately $32.96 million, as debtor

California Dairies — a California dairy marketing and processing cooperative in the bankruptcy of Dean Foods Co., which concluded through a sale of substantially all assets totaling approximately $545 million,as pre- and post-petition creditor, and chairman of the Unsecured Creditor’s Committee

Ameredev II, LLC — $46.6 million acquisition of substantially all of the assets of Lilis Energy, Inc. and its affiliates as part of a 363 bankruptcy sales process, as purchaser

Wells Fargo Bank, N.A. — Chapter 11 bankruptcy case and successful reorganization of Diamond Offshore Drilling, Inc. and certain of its affiliates. The plan of reorganization and exit financing included approximately $400 million in a revolving credit facility, $100 million in a term loan and over $85 million in privately placed notes, as administrative agent and RBL Lenders

Crédit Agricole Corporate and Investment Bank — $2.44 billion letter of credit facility and approximately $544 million in funded debt for McDermott International in the successfully completed emergence from bankruptcy, as agent to the lenders

Alliance of American Football (AAF) — a developmental professional football league in its out of court restructuring efforts and ultimate liquidation through a Chapter 7 bankruptcy proceeding in the United States Bankruptcy Court for the Western District of Texas, San Antonio Division

Energy & Exploration Partners, LLC and its affiliates — Chapter 11 bankruptcy cases in the U.S. Bankruptcy Court for the Northern District of Texas

Linc Energy Ltd. as Australian-based oil, gas, and coal company, and its US subsidiaries — in bankruptcy case, as debtors

Deep Marine Technology Inc. — owner of offshore vessels and robotic submersibles for use in underwater oil and gas pipeline repair in a bankruptcy case, as debtor

“I Scream, You Scream, We All Scream at Preference Claims,” ABA Business Law Today, October 2, 2018.

“As US Shale Drillers Suffer, Even the Bankrupt Keep Pumping Oil,” Reuters, April 1, 2016.

US workers struggle even as prices rebound

Texas Lawyer Names Jason G. Cohen to 2016 List of Lawyers on the Rise

As US shale drillers suffer, even the bankrupt keep pumping oil

Your Word Is Your Bond: Fifth Circuit Court of Appeals Determines Surety Bonds Are Not Executory Contracts Even Through Multiparty Approach in In re Falcon V, LLC

Ransomware: An Enterprise Risk for the Unprepared

Third Circuit Holds that Automatic Perfection Provisions Are Not So Automatic