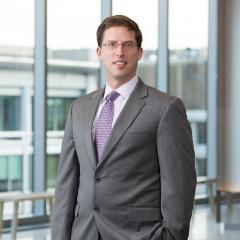 Jason Hutt, chair of the firm’s environmental department, advises and defends clients with a deep appreciation of the high-profile and complex environmental and energy issues of our day. His advice and advocacy are informed by a technical understanding for how energy and key industrial sectors operate as well as an acumen for the challenges Bracewell’s clients must navigate to achieve their business objectives.

Jason served as the lead environmental lawyer representing Halliburton in the various investigations that arose from the Deepwater Horizon explosion, including President Obama’s Special Task Force, the U.S. Congress and the Chemical Safety Board (CSB). He has advised, litigated and defended on behalf of many other energy and industrial clients to achieve optimal results in the context of administrative, civil and criminal enforcement actions as well as bankruptcy proceedings. In providing strategic advice and advocacy for clients, Jason draws upon his experience with and relationships within key federal agencies, including Environmental Protection Agency (EPA), Department of the Interior (DOI), Department of Energy (DOE), Consumer Financial Protection Bureau (CFPB), Department of Justice (DOJ) and state Attorneys General. Jason is a key member of Bracewell's incident response and internal investigation teams for matters subject to the jurisdictional reaches of these agencies.

Jason's experience and perspective inform his advice to project developers, debtors, investor groups and financial institutions focused on the business implications of various policy initiatives as well as the environmental risks and liabilities associated with transactions. His thoughts on legal and policy matters are regularly reflected in the mainstream media and trade publications covering energy and environmental issues.

He is an expert in environment law and understands his client’s business. He was creative in finding solutions – he did fantastic work.
Chambers USA, 2022

Upstream operator — multiyear investigation, disclosure and resolution of potential criminal and civil violations of Sections 402 and 404 of the Clean Water Act and related state statutes in the Marcellus and Eagle Ford plays

Oilfield services company — multiyear EPA investigation and Clean Air Act enforcement action, from the issuance of information requests up through the settlement phase, including implementation of the Supplemental Environmental Project

Halliburton Energy Services, Inc. — various investigations that arose from the Deepwater Horizon incident, including President Obama’s Special Task Force, the U.S. Congress, and the CSB. Bracewell’s team brought the matter to a very successful resolution for Halliburton – one that included no criminal charges related to the explosion, the oil spill, or the environmental impacts.

The Sterling Group — The acquisition, operation and divestiture of a middle market private equity firm’s portfolio companies. Recent work included serving as lead environmental counsel in: acquiring the U.S. domestic assets of a European designer and manufacturer of trailer axles, trailer and caravan components, and chassis and motorized chassis, with more than 20 locations around the world; acquiring several bathware­related businesses across the U.S. in supporting the formation of the American Bath Group; and divesting a company that specializes in providing fully operated and maintained crane services, heavy rigging and specialty hauling services.

Baker Hughes Incorporated — multi-year negotiation and implementation of an Administrative Settlement Agreement and Order on Consent (ASAOC) for the investigation of a Superfund site in Missouri. Several federal agencies were involved in the negotiations, including the U.S. Forest Service, the USDA and the DOJ.

“DOE’s Final Report on Shale Gas: Where Do We Go From Here?” Trends, ABA Section of Environment, Energy and Resources Newsletter, January/February 2012.

Environmental Group of the Year: Bracewell

December 1, 2016 In The News Scientific American

BP spars with states, feds over Gulf of Mexico health

EPA's Fracking Finding May Prove a Boon for Industry

Recasting the Safety Act to Cover Acts of Cyberterrorism: Advantages for the Energy Industry

NY Makes A U-Turn On Fracking From 2011 Report

How Putin is a 'lobbyist' for US nat gas exports

John Cruden's Ready to Ride a White Horse to Justice

Going Green in the Brownfields: Michael Borkowski and the Community Power Group

ESG Seminar: Best Practices for M&A and Quick Hits on In Different Disciplines

Environmental Justice Under the Biden Administration

Recent Cases Reshaping the Intersection of Bankruptcy and Environmental Law

What Will Be the Fate of PHMSA’s Final Hazardous Liquids Pipeline Rule?

Reports Connecting Seismic Activity to the Injection of Produced Water

Recent Developments in Regulation of Oil and Gas NORM

Getting to Know: Jason Hutt

The Outlook for Environmental Enforcement in 2013

Supreme Court Allows Judicial Review of EPA Administrative Orders Under the Clean Water Act - But How Much Will It Help?