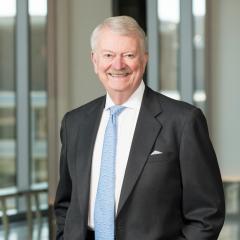 Gene Godley counsels and advises corporate clients on legislation, trade, tax, energy, regulatory affairs and international financial and transactional matters. He has practiced law for more than 35 years and has served on the firm’s management committee, was managing partner of the firm’s Washington, D.C. office and founded the firm’s legislative group, now known as the Policy Resolution Group. Gene's experience includes representing companies in regulatory and transactional matters, including trade and finance laws. He is certified by the International Centers for Arbitration and has served as a Financial Industry Regulatory Authority (FINRA) arbitrator. He combines his private practice with several public appointment positions.

In the public sector, Gene has served in various management and legal positions, including as chief of staff to two United States Senators and as general counsel of two U.S. Senate Committees. In 1976, he was nominated by former President James Earl Carter and confirmed by the U.S. Senate as assistant secretary of the Treasury, where he received the Alexander Hamilton Award, the highest award of the Treasury Department. He is chairman of the Annapolis Port Wardens, appointed by the mayor of Annapolis, where he has served since 1994. Gene was appointed several times by the United States Trade Representative and secretary of commerce to the Industry Trade Advisory Committee (ITAC) on Energy for Trade Policy Matters. The committee provided advice on the concerns and interests of the private energy sector in regard to U.S. trade objectives. He served six years as the chairman of the Technical Advisory Group (TAG) of the Energy Sector Management Assistance Programme (ESMAP) of the joint United Nations Development Programme/World Bank.

In the private sector, Gene has been a management consultant for Booz Allen Hamilton, served on the boards of banks and several energy companies, and was chairman of the board of an energy trading company.