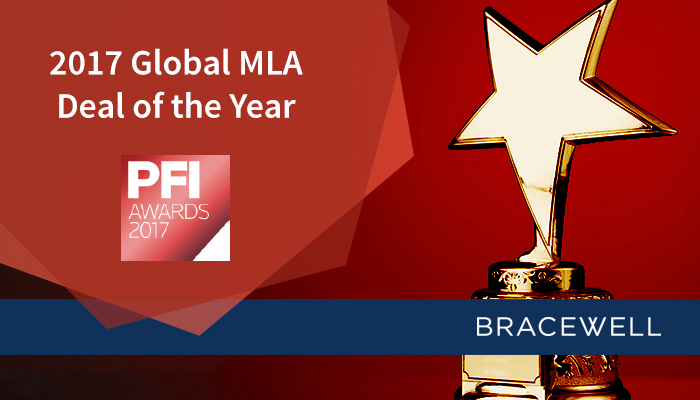 DUBAI / LONDON – Bracewell LLP is pleased to announce that the firm’s representation of Alcazar Energy Partners in four separate solar projects in Egypt has been recognized as part of the Egyptian solar projects named 2017 Global MLA Deal of the Year at the Project Finance International Awards. The award was shared by all the projects in Round 2 of Egypt’s Renewable Energy Feed-in-Tariff Programme (Egypt FiT), which were financed by the International Finance Corporation (IFC) and the European Bank for Redevelopment.

On October 29, 2017, the IFC, the private sector arm of the World Bank Group, announced the simultaneous financial close for its first 13 solar projects in Round 2 under the banner of IFC’s Nubian Suns Renewable Energy Financing Programme.

“Bracewell played an instrumental role across a number of our projects, enabling Alcazar Energy to simultaneously bring five solar and wind projects to financial close across Jordan and Egypt last year alone,” said Daniel Calderon, co-founder and chief executive officer of Alcazar Energy. They are “always pragmatic, responsive and available to step up when required applying their deep sector knowledge to finding timely cost effective and down to earth solutions.”

The Egyptian government announced the overall Egypt FiT programme in September 2014 as part of the government’s efforts to increase the country’s energy capacity in the face of serious power shortages and power outages. The Egypt FiT programme aims to provide up to 4 gigawatts of renewable energy to the grid.

Bracewell has emerged at the forefront of representing developers in the Egypt and Jordan FiT programmes. The firm was also named Infrastructure & Energy Projects Team of the Year by The Middle East Legal Awards 2017. Bracewell was selected in large part for advising Alcazar on the project development and financing of the 82 megawatt Al Rajef Wind Power Project in Jordan.

Bracewell lawyers involved in the Egyptian solar projects include: