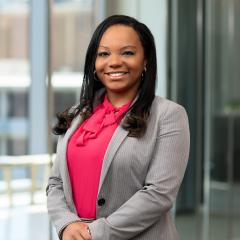 Yasmin (Rigney) Nelson is a senior political and policy executive who has worked on presidential and federal campaigns, and in the United States Congress. Yasmin has a demonstrated history of bipartisan and bicameral work in the US Senate, aiding senators in passing legislation into law, shaping regulations and developing public policy proposals. Yasmin is an expert coalition builder and passionate advocate, with an expertise in creating client-focused campaigns. She has expertise in finance, banking, housing and financial services issues with an ability to communicate and advance complicated policy issues with political leaders, companies and stakeholders.

Prior to joining Bracewell, Yasmin was the senior policy advisor to then-Senator Kamala D. Harris. In this role, Yasmin was responsible for crafting and managing Harris’ economic agenda, as well as advising on Congressional Tri-Caucus policy and political issues. As lead on Congressional Black Caucus for Harris, Yasmin concentrated on advancing policy initiatives with a focus on equity and inclusion. She worked directly with several members of Congress.

Yasmin played a significant role in Senator Harris’ efforts to propose policies that would reform the tax code, expand the social safety net and advocate for greater equity in federal programming. Yasmin previously served on the US Senate Finance Committee under Ranking Member Senator Ron Wyden and in the offices of Senators Debbie Stabenow and Cory Booker, advising on the economic and housing portfolios.

The American University, We Lead Certificate Program for Women in Politics

Tax Foundation University, Economic Theory and the Application to Public Government, Finance and the Economics of Taxation

The Breakdown Versus The Bottom Line

100 Days in 60 Minutes: A Conversation With Yasmin Nelson