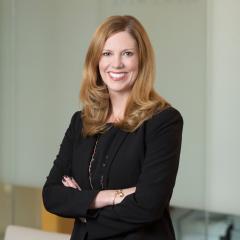 Erin Hennessy, chair of the firm’s trademark and copyright department, focuses on trademark law, copyright law and internet and social media issues spanning many industries including media, publishing, technology, retail, fashion and financial services. Having served as a former chief trademark counsel in-house, she brings an innate business sense and firsthand insights to her practice.

Erin counsels clients on all aspects of IP with a particular emphasis on supporting legal, business and marketing teams with branding issues facing their businesses. She handles worldwide trademark matters including trademark counseling, clearance, registration, protection and enforcement, domain name and internet issues, litigation, licensing and transactional work. She has worked on various policy issues such as the launch of the new gTLDs, trademark dilution, and cybersquatting. She has served as lead trademark counsel on major corporate transactions such as the $9.6 billion spinoff of Time Warner Cable from Time Warner Inc. and the $2.6 billion divestiture of Warner Music Group.

Prior to joining Bracewell, she was the assistant general counsel and chief trademark counsel for Time Warner Inc. Erin sits on the firm’s Women’s Network Committee and Associate Evaluation Committee. She frequently speaks and publishes on topics such as the new gTLDs, trademarks in social media, and trademark prosecution best practices.

She is passionate about intellectual property, has a keen business sense and is super dedicated to her clients.
World Trademark Review 1000, 2019

"Rights in China: Time is right for public figures to register in China," Intellectual Property Magazine, May 2017

“The Joke is in the Bag! Parody at the Federal and TTAB Levels,” IP Strategist, March 2017.

“.bank And Other Domain Names to Open For Financial Institutions...And Others,” IP Today, December 2014.

“Navigating Diversity Issues in the Legal Profession,” Seattle, May 2012.

In The News
Now Hear This

In The News
Corporate Counsel

Rights in China: Time is right for public figures to register in China

In The News
Westlaw Journal

The Kirtsaeng Decision — Keep Calm and Copyright On

In The News
Westlaw Journal

In The News
Thomson Reuters

Inside Oprah Winfrey's Battle for 'Power'

In The News
Wrap, The

Nike's Promise Not To Do It

The 411 on Section 411(a) of the Copyright Act: Supreme Court Holds That Copyright Owners Cannot File Infringement Lawsuits Until After Receiving Official Grant of Registration

Keep Quiet and Carry On under the EU Trade Secrets Directive

The Trade Secrets Bill Proceeds to the President's Desk

By: Jeffrey B. Andrews and Erin S. Hennessy

By: Jeffrey B. Andrews and Erin S. Hennessy

Supreme Court Rules that Trademark Tacking is a Question for Juries

.bank and Other Domain Names to Open for Financial Institutions... And Others

Copyright Co-Authorship: Be Prepared to Weather the Storms

Copyright Owners: Keep Your Eye on the Road

How to Feel About the "Big Reveal": Roundup on the Land Rush for New gTLD Applications

What's the Deal with the "Big Reveal"? Getting Exposed to the List of New gTLD Applicants and Applications