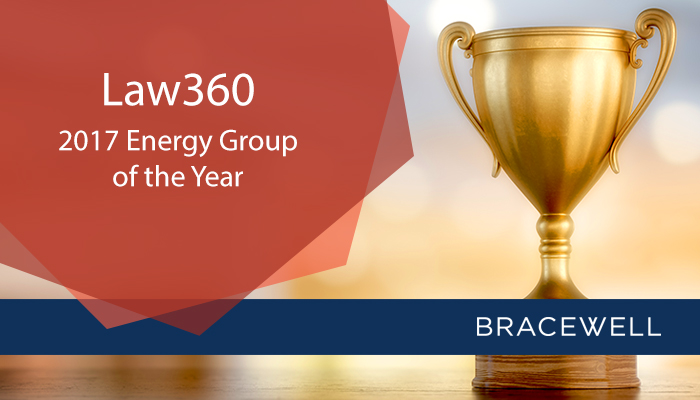 HOUSTON – Bracewell LLP is pleased to announce that Law360 has recognized the firm’s energy practice as an Energy Group of the Year for 2017. Bracewell is one of only five firms recognized for its energy work in 2017. This marks the sixth time in eight years that Bracewell has received this award.

“We are honored to have Law360 recognize the tremendous success of our energy team in 2017,” said G. Alan Rafte, chair of Bracewell’s business and regulatory section. “We are extremely proud of the large and experienced energy team that we have assembled at Bracewell. Our energy team works seamlessly across our national and international offices with an industry focus that spans the entire energy sector.”

Law360, a Portfolio Media outlet, annually identifies Practice Groups of the Year based on the significance, size, complexity and quantity of significant representations completed successfully over the past year. Since the launch of the awards program in 2010, Bracewell is one of only two firms that has been named an Energy Group of the Year six or more times.

With one of the most preeminent energy practices in the United States, Bracewell played a leading role in some of last year’s most significant transactions in the upstream, midstream and downstream sectors, as well as in conventional power and renewable/alternative energy. Highlights included:

In addition to its transactional work, Bracewell is representing Statoil Wind US LLC in defending its federal wind lease area offshore New York, and the federal offshore regulatory program as a whole, against legal challenges filed in federal district court. Bracewell is also lead counsel to Valero Energy Corporation and its subsidiaries in a lawsuit against the EPA for failing to take required action under the Renewable Fuel Standard of the Clean Air Act.

Law360 will publish profiles of the winning practice groups starting in January. A complete list of winners can be found here.