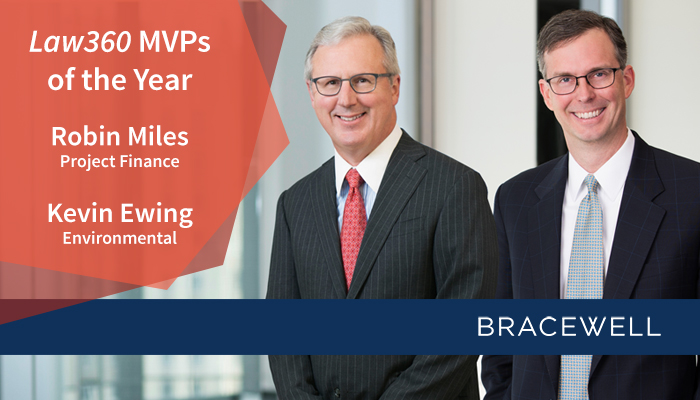 HOUSTON – Bracewell LLP is pleased to announce that Law360 has named two Bracewell partners MVPs. Washington, DC Partner Kevin A. Ewing has been selected as an Environmental MVP, and New York Partner Robin J. Miles is a Project Finance MVP. Both lawyers, along with their fellow MVP honorees, will be profiled by Law360 in the coming weeks.

Ewing, an environmental and natural resources lawyer at Bracewell for 25 years, recently led a team that broke new ground in establishing that the offshore services sector is not regulated under the environmental and safety provisions of the Outer Continental Shelf Lands Act. For his role, the National Law Journal honored Ewing as a 2017 Energy & Environmental Trailblazer as part of ALM’s National Law Journal Trailblazers series. Ewing is currently representing Statoil Wind US LLC, which won the bid for the federal wind lease area offshore New York. The lease is the most significant wind auction in the United States to date, and puts Statoil in position to explore the development of a full-scale commercial wind project offshore one of the biggest power demand centers in the world.

Miles consistently executes large and complex project financings for both national and multinational companies across a wide spectrum of industries, most notably for energy and chemical companies. He recently led a Bracewell team in representing Michigan Power Limited Partnership, a Rockland Capital, LLC portfolio company, in the $360 million refinancing of bank debt and modification of gas supply and related hedges and credit sleeve for its 125 megawatt cogen facility located in Ludinton, Michigan. He was also part of a Bracewell team that represented Yuhuang Chemical, Inc., as borrower, in an $800 million loan facility for the construction of a methanol plant in St. James Parish, Louisiana.

Law360, a Portfolio Media, Inc. publication, annually honors the top lawyers in the legal industry for their exceptional work with an MVP designation. A group of Law360 editors reviewed more than 1,000 submissions from the top US law firms to select this year’s honorees. A full list of winners is available here.

In The News
Washington Examiner

Energy Regulation and Legislation to Watch in 2020