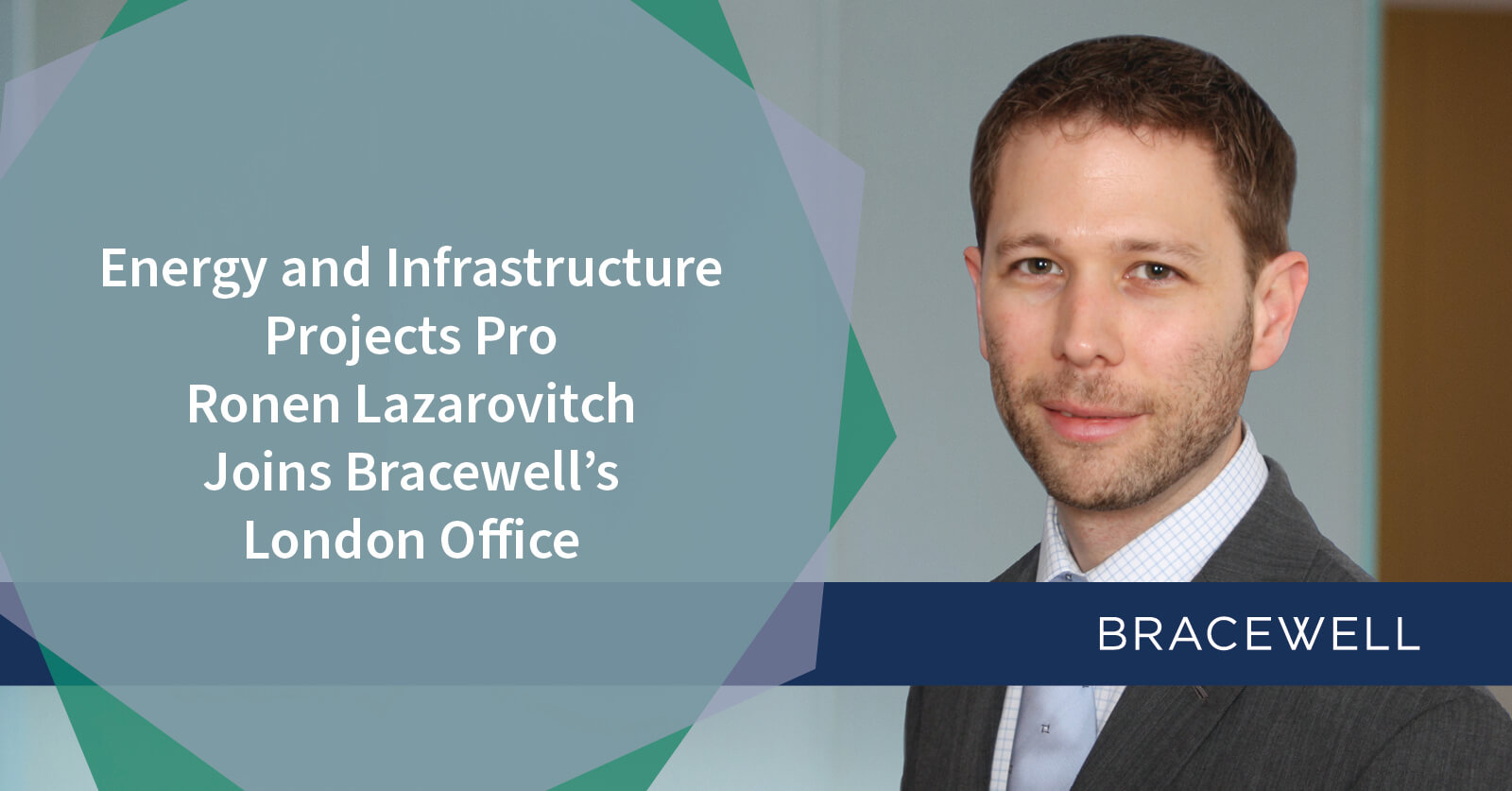 LONDON – Bracewell (UK) LLP announced that Ronen (“Ro”) Lazarovitch has joined the firm’s global energy practice as a partner in the London office, where he will advise clients on energy and infrastructure projects in the Middle East, Eastern Europe and Africa. Lazarovitch comes to the firm from Freshfields Bruckhaus Deringer.

Lazarovitch advises sponsors, project companies, lenders and governments on all aspects of major projects in the energy, mining, infrastructure and power sectors, with particular experience in upstream and midstream oil and gas and hydrocarbons. Lazarovitch has played a leading role on strategically important, first-of-their-kind transactions in countries throughout the Middle East, Europe and Africa, including Bulgaria, Egypt, Greece, Jordan, Kenya, Qatar, Russia and Uganda, among others. Most recently, he was part of the team that represented the Egyptian Refining Company on a major restructuring of its project financed refinery in Cairo, Egypt; Eldorado Gold Corporation on the negotiation of an investment/concession agreement with the Greek government for the Kassandra gold mines in Northern Greece; the lenders on the on the multi-sourced financing of the €23 billion Amur gas processing plant in Russia; and Vinci Concessions and Meridiam on their winning bid and achievement of commercial close for the Nairobi-Nakuru-Mau Summit Highway PPP project in Kenya.

“Ro’s addition complements our already deep bench on the energy projects side with his broad experience and client base,” said Jason Fox, managing partner of Bracewell’s London office.

Bracewell consistently plays a leading role on major energy and infrastructure projects throughout the world. In 2020, the firm represented an international investment consortium, comprised of Siraj Energy, Marubeni Corporation and Total Solar, on the development and implementation of the first utility-scale renewables independent power project in Qatar; Fotowatio Renewable Ventures in the first utility-scale renewables project in Armenia and its second utility-scale battery project in the UK; and Equinor as US counsel in the $1.1 billion agreement to sell BP a 50 percent interest in the Empire Wind and Beacon Wind projects off the US East Coast.

Lazarovitch is the fifth partner to joins Bracewell’s London office in the last five months. He follows the arrival in January of Tom Jamieson, Jo En Low and Gordon Stewart, each of whom has a focus on renewable energy; and the arrival in November of Alistair Calvert, who joined the firm’s international energy disputes practices.

“Bracewell is a top-tier energy firm. I am excited to be part of a dynamic team that will enable me to better serve the need of my clients,” said Lazarovitch.

Lazarovitch received his Bachelor of Commerce in economics and LL.B. from the University of Otago in New Zealand, and his LL.M. from St. Catharine’s College, University of Cambridge.