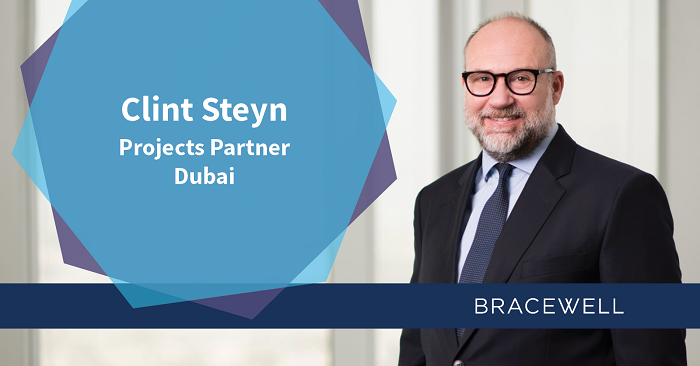 DUBAI, UAE – Bracewell LLP announced today that Clint Steyn has rejoined the firm in Dubai as a partner and regional head of projects. Steyn most recently was general counsel and company secretary at Alcazar Energy, a leading owner, operator and developer of renewables projects in the Middle East and Northern Africa (MENA).

“We’re pleased to welcome Clint back to the firm,” said Bracewell’s Managing Partner Gregory M. Bopp. “His extensive projects experience in the MENA region enhances the international platform of our global energy and infrastructure practices.”

Steyn has over 20 years of experience, including 10 years on the ground in the Middle East. He has a wealth of M&A, project development and project finance experience on groundbreaking power projects in the Middle East and Africa, including renewable energy projects. While at Bracewell and during his time at Alcazar Energy, Steyn advised on a wave of groundbreaking regional renewables projects, including numerous Jordan solar projects across procuring rounds, the Al Rajef and Shobak wind projects in Jordan and multiple Egypt FIT solar projects, all of which successfully achieved financial close. Steyn was a partner in Bracewell’s Dubai office from 2014 to 2017. During his time with the firm, he was recognized as a leading energy and infrastructure lawyer in Legal 500 EMEA (2015–2017) and Chambers Global (2016). Legal 500 EMEA named Steyn as one of eight “Leading Individuals” practicing in UAE Energy & Infrastructure for 2016–2017.

“Clint is one of the most respected energy and projects lawyers in the Middle East today,” said Chris Williams, managing partner of Bracewell’s Dubai office. “His return to the firm, coupled with the recent arrival of Andrej Kormuth, enables us to offer clients an unrivalled projects practice that builds on the firm’s significant experience in energy and infrastructure markets throughout the Middle East and further afield.”

“Our award-winning London and Dubai offices work seamlessly together. Clint’s return to the firm will further add to this,” said Jason Fox, managing partner of Bracewell’s London office.

Bracewell’s Dubai and London office are consistently recognized as market leaders. The Dubai office, which celebrates its 12th anniversary in June, was honored in 2018 as the “Infrastructure and Energy Projects Team of the Year” at The Middle East Legal Awards. Bracewell previously received this award in 2017 and was shortlisted in this category in 2016. Bracewell is the only firm to win this prize more than once since the award’s inception in 2012.

Bracewell’s London office was named “Legal Services Provider of the Year” at the 2018 Petroleum Economist Awards. In its inaugural list of Best Law Firms, The Times commended Bracewell as one of the leading firms in the UK for energy and renewables work. IJ Global recognized Neptune Energy Group’s acquisition of a majority stake in ENGIE E&P International S.A. (EPI) for $3.9 billion as its 2018 Oil & Gas Upstream Transaction of the Year at the 2018 Europe and Africa Awards. Chambers UK awarded the firm seven rankings in its 2019 edition, and the London team earned 13 rankings in the 2019 edition of IFLR1000 Financial and Corporate Guide. In addition, Bracewell secured 18 recommendations in the 2018–2019 edition of Legal 500 UK.