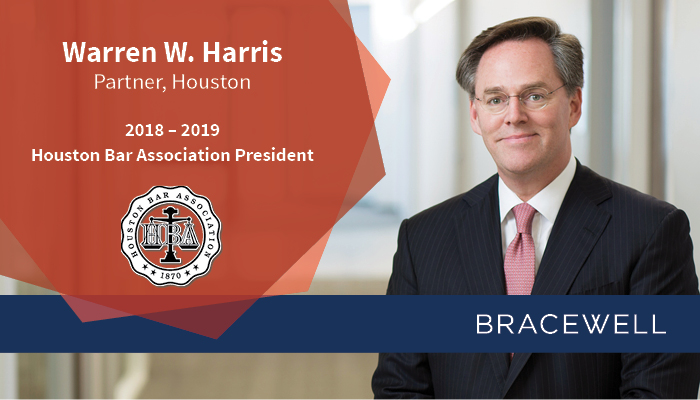 HOUSTON – Bracewell LLP is pleased to announce that Warren W. Harris, a Partner in Bracewell’s Houston office and chair of the firm’s Appellate Practice Group, was named President of the Houston Bar Association (HBA) for 2018-2019. Harris was sworn in as the new HBA president on May 17 at the HBA’s annual dinner.

Harris has handled hundreds of appeals in state and federal courts across the United States. In 2017, the Texas Bar Foundation honored him with the Gregory S. Coleman Outstanding Appellate Lawyer Award, which is presented annually to a lawyer with a distinguished career as an appellate lawyer. Harris also is a Fellow of the American Academy of Appellate Lawyers.

As HBA president, Harris will lead the development of programs that promote professionalism, ethics, member services and community involvement, including programs that educate the public on judicial civics, the rule of law, and the role of lawyers in our society.

Harris has a long history of involvement in the HBA. Since 2008, he has been a member of the HBA Board of Directors. He has chaired the HBA’s Appellate Practice Section, as well as the Houston Volunteer Lawyers and Houston Lawyer Referral Service. Also, he has been editor-in-chief of The Houston Lawyer, HBA’s bi-monthly magazine.

A Life Fellow of the Houston Bar Association and the Texas Bar Foundation, Harris served as Fellows Chair. Harris is a past President of the Texas Supreme Court Society, which in 2016 gave him the President’s Award for his work as the founder of the Taming Texas project. Within its first year, the program recruited lawyers and judges to teach court history and civics to 10,000 students in the metropolitan Houston area.

Left, right switch sides when it comes to trusting judges