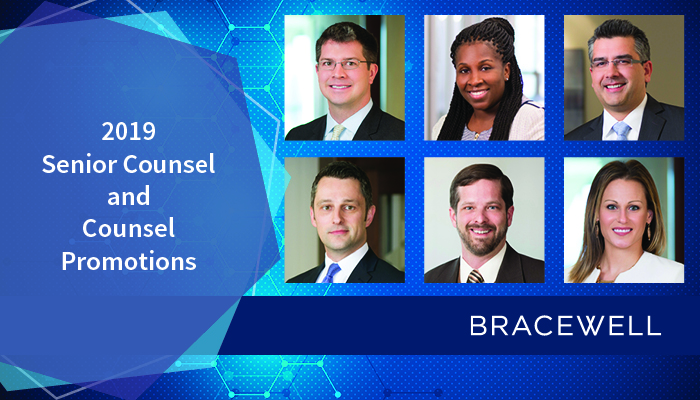 “These talented lawyers have distinguished themselves through their service to the firm’s clients and the legal profession,” said Bracewell Managing Partner Gregory M. Bopp. “I’m pleased to congratulate them on their promotion.”

LaTasha Mabry Snipes, Houston – Snipes represents clients in intellectual property litigation, including patent, trade secret, copyright and trademark litigation. She also counsels clients on the strategic development and monetization of patent portfolios, the protection of multi-media projects and branding strategies. Snipes worked as an electrical engineer before becoming a lawyer. She earned her B.S. in electrical engineering at Iowa State University and her J.D. at the University of Houston Law Center, where she was submissions editor of Houston Business & Tax Law Journal. In 2017 and 2018, The National Black Lawyers named Snipes to its Top 40 Under 40 list.

Jared Schuettenhelm, Seattle – Schuettenhelm’s practice focuses on all aspects of intellectual property, including IP litigation, IP counseling and strategy, technology licensing and transactional matters, and patent royalty audits. Prior to his legal career, Schuettenhelm worked as a process engineer and scientist in the medical devices sector. He earned a B.A, with honors, from the University of California, Santa Cruz, and a J.D., cum laude, from Santa Clara University School of Law, where he was managing editor of the Santa Clara Computer and High Technology Law Journal and a member of the Order of the Coif. From 2014 to 2018, Thomson Reuters has recognized Schuettenhelm as a Washington Super Lawyer Rising Star.

Tom Swarbrick, Dubai – Swarbrick is a construction lawyer whose practice focuses on energy projects. He advises governments, developers, lenders and contractors on the construction and O&M aspects of major oil and gas and other infrastructure projects. He works predominantly in the Middle East and Africa. Swarbrick earned his B.A. at the University of Manchester and his Graduate Diploma in Law and Legal Practice Course at Nottingham Law School. Swarbrick has been recommended for construction by Legal 500 UK since 2017, ranking as a Next Generation Lawyer in 2017. Clients tell Legal 500 that Swarbrick is a “real up-and-coming star” with a “strong focus and great work ethic.”

Lauren A. West, Dallas – West defends employers against employment discrimination, retaliation and harassment claims, collective wage and hours actions, breach of contract disputes and whistleblower allegations. She also defends clients in administrative proceedings before federal and state employment agencies, advises on issues related to federal and state employment laws and assists clients in drafting employment-related contracts and policies. West serves on Bracewell’s Diversity & Inclusion Committee. In 2015, she co-chaired the Young Employment & Labor Lawyers Committee of the Dallas Association of Young Lawyers. West earned her B.S. from the Kelley School of Business at Indiana University and her J.D. from Northwestern University School of Law. She is certified in employment law by the Texas Board of Legal Specialization.

Bracewell Advises TC Energy Corporation as US Counsel in Connection With the Government of Alberta’s $1.1 billion Equity Investment and $4.2 billion Loan Guarantee With Respect to the Keystone XL Pipeline Project