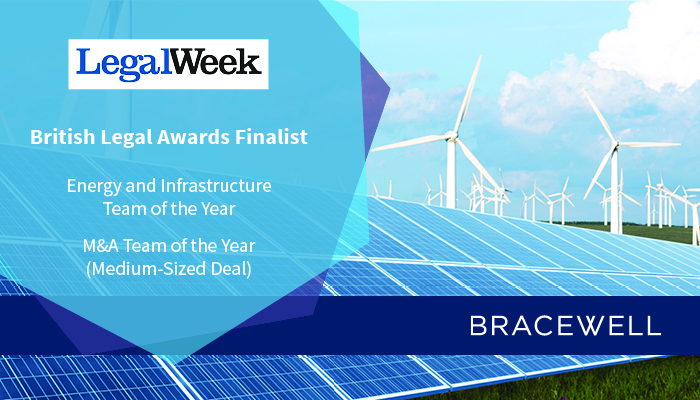 London (October 2, 2018) – Bracewell has been shortlisted for two awards at the upcoming British Legal Awards: Energy and Infrastructure Team of the Year and M&A Team of the Year (Medium-Sized Deal).

The firm’s representation of Alcazar Energy Partners in connection with the development and project financing of four 50 megawatt solar projects in Egypt secured the firm a spot on the list of finalists for Energy and Infrastructure Team of the Year. In February, this series of transactions was named 2017 Global MLA Deal of the Year at the Project Finance International Awards.

Bracewell was shortlisted in for M&A Team of the Year (Medium-Size Deal) in recognition of the firm’s role in advising Eni in its landmark development of the “super-giant” Zohr gas field located in the Egyptian sector of the Mediterranean Sea.

The British Legal Awards celebrate achievement, excellence and innovation in the legal profession. The winners will be announced on November 29 at an awards ceremony in London.