When The George Washington University Law School came calling to sponsor a pair of teams for the National Energy & Sustainability Moot Court Competition, Bracewell was more than happy to step to the plate.

Last October, GW approached Joshua Robichaud, a GW Law alumnus and associate in the firm’s Washington, DC office, about sponsoring two teams for the competition. GW Law had budgeted for one team entering, but due to overwhelming demand, the school was looking for a sponsor to place another two entries. Josh, along with fellow Bracewell Associate Kathryn Penry, were past participants in the competition and credit that experience with developing their interest in energy law. Josh pitched the idea and Bracewell stepped up to cover the registration and travel costs of the two additional teams.

Hosted by the West Virginia University College of Law Moot Court Board, the annual National Energy & Sustainability Moot Court Competition is geared toward law students desiring to work in the energy and sustainable development law field. Competing in this event—which consists of both briefing and oral argument components—tests students research and advocacy skills and provides an invaluable opportunity to meet and interact with other law students interested in energy and sustainability, as well as industry professionals and government regulators. The format guarantees that each team participates in a minimum of four preliminary rounds before the field is narrowed to 16 teams. Earlier rounds are judged by experienced energy and environmental lawyers, while the bench in the final round includes judges from the highest courts in the land.

The competition has grown from six teams in 2011 to a record-high 30 teams in March 2019. The problem each year focuses on current issues facing the energy industry. This year’s fact pattern focused on arsenic pollution from a coal ash pond in the fictional state of 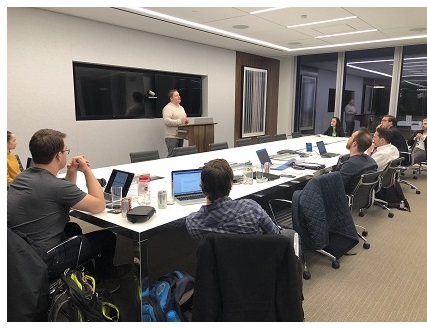 Vandalia. The problem specifically concentrated on the definition of a point source under the Clean Water Act and judicial review of FERC ratemaking determinations.

Bracewell played an integral role in GW Law’s success. The three teams began this January by researching, writing and filing briefs on the issues. In early February, the teams were hosted by Bracewell in the firm’s DC office for weekly practices. The teams received feedback on their briefs, honed their oral argument skills, and developed their understanding of the issues presented in the case.

The three teams were primarily coached by John Shepherd, FERC Director of Legal Policy, with assistance from Josh, other former competitors and Bracewell lawyers.

“Bracewell was honored to sponsor two of the three GW Law teams as they prepared for and competed in the National Energy and Sustainability Moot Court competition.” said Mark Lewis, Managing Partner of Bracewell’s Washington, DC office. “GW’s energy program does an excellent job of preparing law students to become tremendous Bracewell lawyers, with Josh (Robichaud) and Kathryn (Penry), both GW ’18 alums, hitting the ground running as soon as they started and best brief winner, Boris (Shkuta ’19) sure to do the same. We are pleased to continue this tradition by supporting GW’s teams in the future. Bracewell is always looking for talented energy lawyers to join our ranks and this sponsorship provides us another way to connect with students passionate about energy law.” 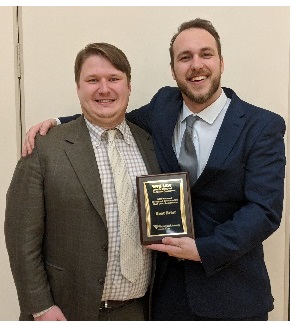 successful year that GW Law has ever had at this competition. Team 1, consisting of 2Ls Steven Boughton and Angelo Bardales, performed extremely well in their four preliminary rounds. Team 2, featuring 3Ls Daniel Vinnik and Boris Shkuta, advanced to the round of 16, but more importantly received the Best Brief Award for the highest scoring brief in the entire competition. After nine rounds of oral arguments in a competitive field of teams, the tandem of 2Ls Blake Grow and James Bartholomew reached the semi-finals in the national competition.

Boris will be bringing his superior brief writing and oral argument skills to Bracewell when he joins as an associate this fall. Bracewell also looks to continue its successful tutoring role, as students are already lining up to participate next spring.