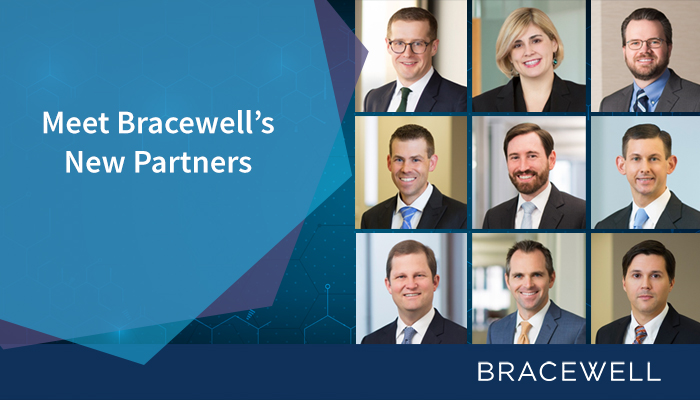 “I’m honored to welcome this highly accomplished group of lawyers to Bracewell’s partnership,” said Bracewell Managing Partner Gregory M. Bopp. “These individuals have distinguished themselves through their relentless commitment to client service excellence, and we look forward to their continued success.”

Adam Blythe, London – Blythe’s international practice covers a broad range of oil and gas transactions, including acquisitions and disposals, project development, joint ventures and other commercial matters across the upstream, midstream and downstream sectors in emerging markets. Blythe has focused on African matters throughout his career and has deep jurisdictional experience in Nigeria, Tanzania and Egypt. He has played a leading role on some the biggest mandates in Bracewell’s London office, including advising Eni S.p.A. on its strategic disposals in Egypt’s Zohr gas field. In 2017, Legal 500 UK recognized Blythe as a Next Generation Lawyer for Oil & Gas Projects. He was also recommended for Projects by IFLR1000 in 2017. Blythe earned an LL.B. with honors from the University of Nottingham and an L.P.C. with distinction from Nottingham Law School. He is the first lawyer internally promoted within Bracewell’s London office in the office’s nearly five-year history.

Mark E. Dendinger, Connecticut – Dendinger’s practice focuses on financial restructurings across a company’s capital structure, most recently in the energy, retail and maritime sectors. He has played a leading role in every complex Chapter 11 case handled by Bracewell over the last five years, including matters for Energy & Exploration Partners, Marco Polo Seatrade, Optim Energy and Venoco. He has also represented creditors on debt and equity restructurings, asset sales, amendments, distressed investments and acquisitions, litigation matters and exit finance transactions. Before his legal career at Bracewell, Dendinger worked for seven years at a private equity investment firm specializing in secondary market transactions, with funds capitalized at more than $15 billion. For the last three consecutive years, IFLR1000 has recognized Dendinger as a Rising Star in Financial Restructuring. Dendinger began his legal career at Bracewell after earning his J.D. from the University of Connecticut Law School. He graduated magna cum laude and Phi Beta Kappa from Saint Olaf College.

Christopher L. Drymalla, Austin – Drymalla counsels clients in the procurement of patents and the management of intellectual property assets, largely within the energy industry. His practice focuses on software, electrical and mechanical technologies. Drymalla has developed extensive experience in software-implemented patents, an area that has dramatically changed in recent years. Prior to his legal career, he worked as an engineer in the electronics and software industries. Drymalla graduated magna cum laude with a mechanical engineering degree from Texas A&M University and earned his J.D. from Baylor University School of Law. He is registered to practice before the US Patent and Trademark Office.

Jonathon K. Hance, Houston – Hance is an accomplished litigator and transactional lawyer. As a litigator, he represents both plaintiffs and defendants in areas of contract, fraud, breach of fiduciary duty, personal injury, patent infringement, copyright, trademark, trade secret and energy-related disputes. As a transactional lawyer, Hance maintains a diverse software licensing and trademarks practice. His clients include established companies and startups, such as Hines Interests Limited Partnership, The Menninger Clinic and The Taste of Texas. Hance served as a judicial clerk to the Honorable Jennifer Walker Elrod of the US Court of Appeals for the Fifth Circuit. In 2015, Hance was elected by his peers to Houston’s 30 for 30 organization. He graduated summa cum laude from Southern Methodist University and Order of the Coif from Washington and Lee University School of Law.

Austin T. Lee, Houston – Lee focuses on transactional oil and gas matters, principally in the upstream sector of the energy value chain. He advises clients on acquisitions, divestitures, joint ventures, exchange agreements and leases for oil and gas properties, as well as operational matters in the upstream sector. Lee’s command of the fundamentals of oil and gas law, along with an insider perspective of the industry from his prior experience as an independent petroleum landman and as upstream legal counsel at an independent exploration and production company, enables him to help clients creatively adjust deal structures in response to changing deal conditions. Lee earned a Bachelors of Business Administration and Masters in Professional Accounting from the McCombs School of Business at The University of Texas at Austin, after which he practiced as a Certified Public Accountant. Lee graduated with honors from The University of Texas School of Law.

Edmund W. Robb, Houston – Robb is a highly skilled and strategic litigator who brings a creative approach to complex energy, construction and municipal litigation matters. In recent years, Robb’s practice has included work for Bracewell’s public and nonprofit clients, such as the City of Houston, Dricscoll Foundation, Lower Colorado River Authority and the Gulf Coast Water Authority. Robb’s practice also focuses on construction litigation. He has notably represented SH 130 Concession Company and the San Jacinto River Authority in significant construction disputes. Outside the firm, Robb volunteers at The Woodlands Bar Association (WBA), where he is a member of the board of directors and chair of the WBA Energy Resources Section, which works to connect and serve in-house counsel and other energy law practitioners in Northern Houston. Robb is a graduate of Seattle Pacific University and Duke University School of Law.

Brian P. Teaff, Houston – Teaff is a tax and public finance lawyer who focuses primarily on the tax aspects of tax-exempt obligations and advising tax-exempt organizations. In addition to representing governmental issuers throughout Texas, he has represented some of the largest tax-exempt organizations in the state, including hospitals and healthcare institutions such as Texas Children’s Hospital, Houston Methodist, Texas Health Resources and CHRISTUS Health; universities such as Rice and Baylor; public charities such as Space Center Houston and the YMCA of the Greater Houston Area; and independent schools such as St. John’s School and St. Thomas High School. Teaff also serves as tax counsel in connection with affordable housing projects financed through the Texas Department of Housing and Community Affairs, Housing Authority of the City of El Paso, Houston Housing Finance Corporation and Harris County Housing Finance Corporation. He has served as chairman of the Tax Section of the Houston Bar Association, chairman of the General Tax Issues Committee of the State Bar of Texas, Tax Section, and vice chairman of the Tax-Exempt Finance Committee of the State Bar of Texas, Tax Section. He holds a B.A. from the University of San Diego, graduated magna cum laude from California Western School of Law and earned an LL.M. in Taxation from New York University School of Law.

Brian H. Tompkins, Austin – Tompkins has extensive experience in the procurement of patents and management of IP assets. He focuses on patent prosecution for software, chemical and chemical process technologies. Tompkins has significant experience in software-implemented patents and has helped global energy companies on such matters. Prior to his legal career, Tompkins was an engineer in the chemical and software industries. He earned a B.S. in chemical engineering from The University of Texas at Austin and graduated with honors from The University of Texas School of Law. Tompkins is registered to practice before the US Patent and Trademark Office.