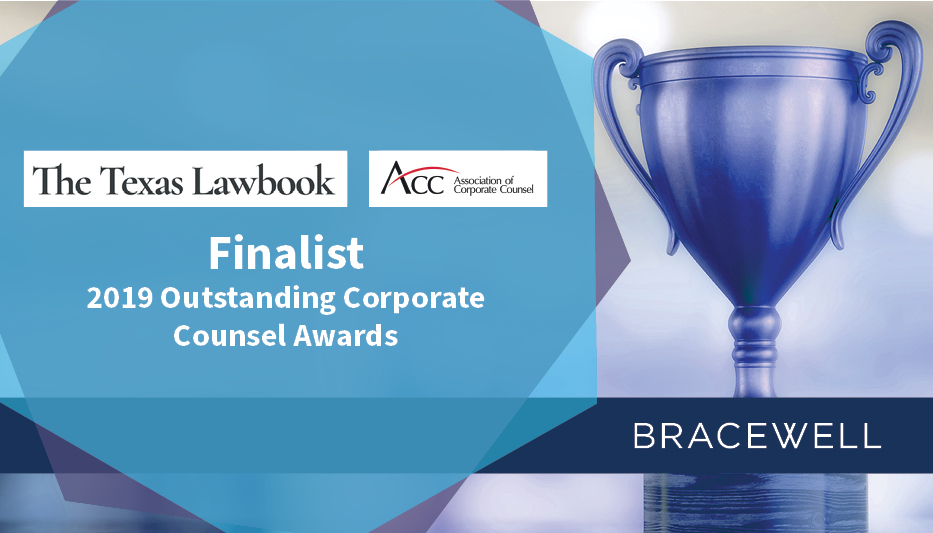 DALLAS – The Texas Lawbook and the Dallas/Fort Worth Chapter of the Association of Corporate Counsel named Bracewell LLP and clients Pier 1 Imports, Inc.  and Prosperity Bancshares as finalists in the Business Litigation of the Year and M&A Deal of the Year categories, respectively, at the upcoming Outstanding Corporate Counsel Awards.

Litigation partners Stephen B. Crain, Bradley J. Benoit and Amy Parker Beeson worked with Pier 1’s Mike Carter and Ray McKown in developing a winning strategy that ultimately led to the dismissal of a putative class action suit alleging that Pier 1 and two former senior executives knowingly or recklessly made material misstatements or omissions regarding Pier 1’s financial metrics and the level of markdown risk associated with its inventory.

The Texas Lawbook and the Dallas/Fort Worth Chapter of the Association of Corporate Counsel received nominations from law firms, legal departments and companies for various awards. Nominations were reviewed and evaluated by a panel of judges that included general counsel, executives and board members from some of the largest businesses in the Dallas-Fort Worth community. Winners will be announced at an awards ceremony at the President George W. Bush Institute in Dallas on January 30, 2020.