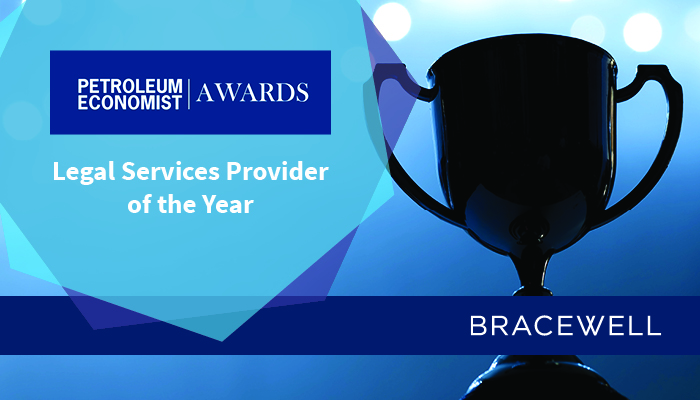 LONDON – At the 2018 Petroleum Economist Awards held on November 27 in London, Bracewell (UK) LLP was named Legal Services Provider of the Year. This is the second time that the London team received this honor. The firm previously won the award in 2015.

In selecting Bracewell as this year’s winner, the judges noted that, among its various accomplishments, the firm “has been at the forefront of the trend of EMEA oil and gas acquisitions, funded by global PE houses.” In particular, Petroleum Economist highlighted the firm’s representation of Carlyle Energy Fund and CVC Capital in connection with the $2 billion financing of Neptune Energy’s acquisition of Engie’s global oil and gas portfolio.

Petroleum Economist also reported the London office advised on “numerous ground-breaking” transactions, including acting for Eni on sales to BP and Rosneft of stakes in the Zohr gas field offshore Egypt; and advising Cheiron Petroleum Group in the first upstream debt deal for an independent in the newly deregulated Mexican market.

In addition, Petroleum Economist noted the recent launch of an international energy disputes practice that complements the London team’s transactional and finance capabilities.

This award is the latest in a number of recognitions for the London office. In November, Chambers UK awarded the firm seven rankings in its 2019 edition, and the office earned 13 rankings in the 2019 edition of IFLR1000 Financial and Corporate Guide. In the 2018-2019 edition of Legal 500 UK, Bracewell secured 18 recommendations; and in its inaugural list of Best Law Firms, The Times commended Bracewell as one of the leading firms in the UK for energy and renewables work.

The Petroleum Economist Awards annually honor the most innovative companies, firms and projects in the global energy industry. An appointed panel of independent experts, drawn from across the international energy industry, judge the submissions and select the winners.

Bracewell Represents Conflicts Committee in Agreement for the Purchase of the Publicly Held Class A Shares of Tallgrass Energy, LP by Blackstone Infrastructure Partners

The Intersection of Natural Gas Pipeline Infrastructure, Federal Permitting, and Supply Considerations for US LNG Exports