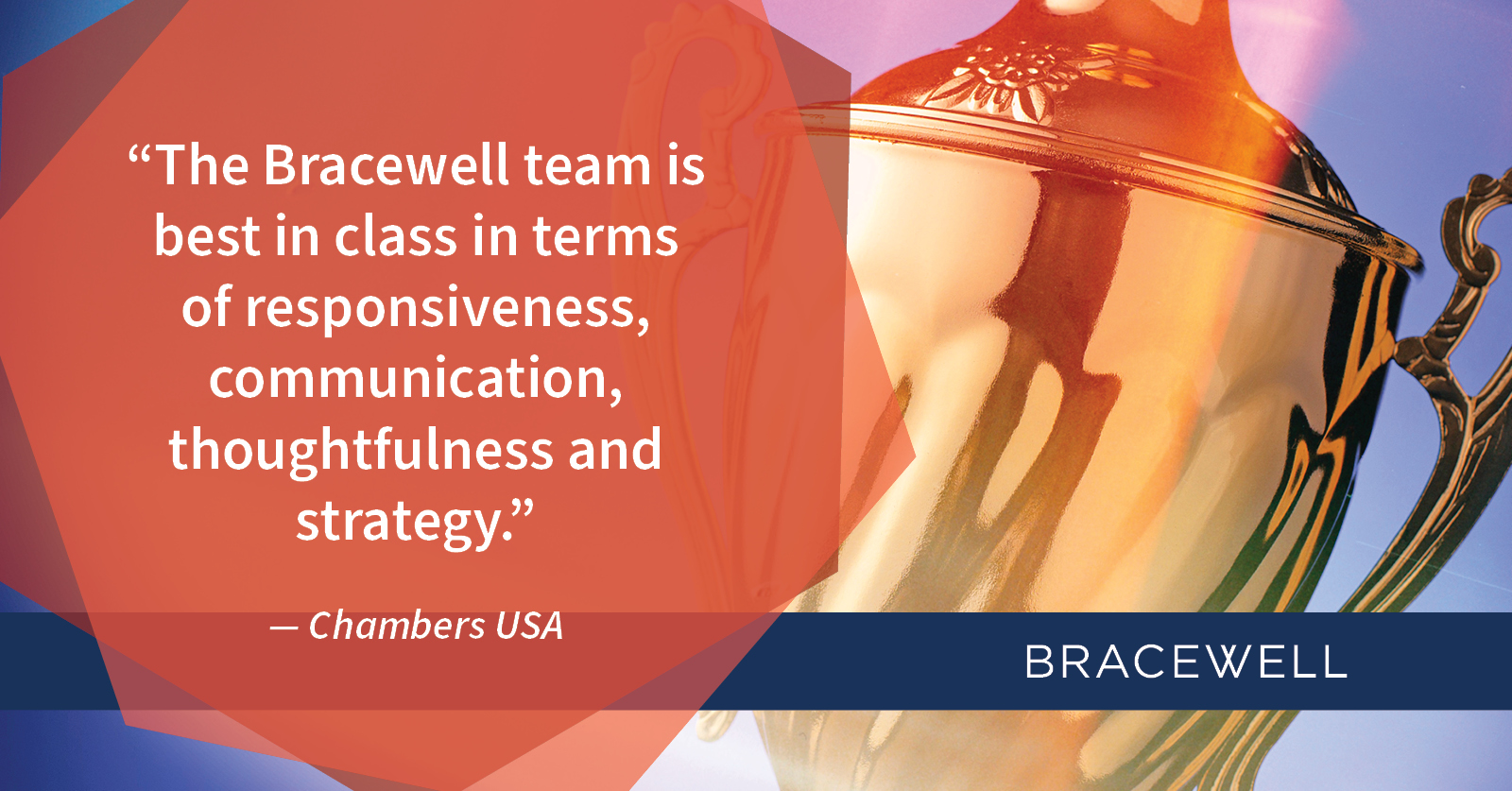 NEW YORK — Bracewell LLP’s commitment to client service was recognized in the 2020 edition of Chambers USA, which recognized the firm with 74 practice and individual rankings for excellence representing clients in the energy, infrastructure, real estate and technology sectors, as well as on regulatory and litigation matters.

For the sixth year in a row, Bracewell earned a Nationwide Band 1 ranking in Oil & Gas (Regulatory and Litigation). The firm was also nationally ranked in the Oil & Gas (Transactional), Electricity (Regulatory & Litigation) and Electricity (Transactional) categories. An impressed client noted that “Bracewell has a deep bench…who do a great job and provide a high level of attention and responsiveness. They are also willing to advocate strongly on the client's behalf.”

Bracewell was ranked as a Band 1 firm in Texas: Environment for the fourth consecutive year. In addition, the firm was nationally ranked in both Climate Change and Environment. According to Chambers USA, the Bracewell team is a “high-caliber group that counts a range of Fortune 500 firms in its client base” and is “highlighted for its significant experience dealing with regulatory agencies and handling high-value litigation and transactions.”

For the thirteenth year in a row, Bracewell was ranked Band 1 for Texas: Banking & Finance. “The Bracewell team is best in class in terms of responsiveness, communication, thoughtfulness and strategy,” notes one commentator.

With respect to individual ranks, approximately 35 percent of the firm’s US partners were recognized as leaders in their respective practice areas. Of the 55 lawyer rankings in this year’s guide, 24 percent of the lawyers were ranked as Band 1, Senior Statespersons or Eminent Practitioner.

Bracewell’s overall results are summarized below.

Chambers & Partners has been publishing guides to the legal profession since 1990. On the basis of in-depth research, Chambers & Partners identifies the world’s top lawyers in more than 175 countries, providing independent rankings and editorial commentary. The qualities on which rankings are assessed include technical legal ability, professional conduct, client service, commercial astuteness, diligence, commitment and other qualities most valued by clients.

The Major Merger Reviews of 2019