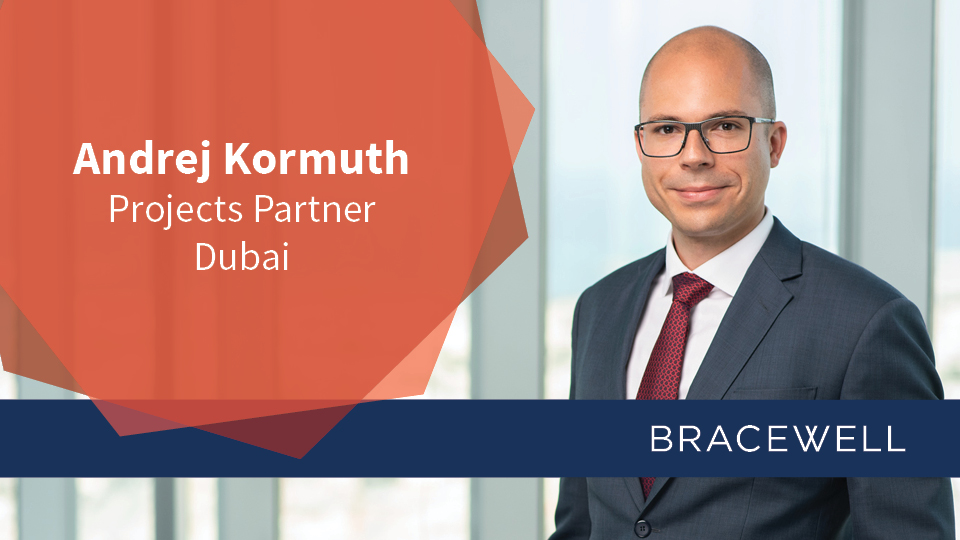 “Andrej is an outstanding projects lawyer. His extensive knowledge of projects opportunities in the MENA region complements the work of our Dubai and London teams,” said Bracewell’s Managing Partner Gregory M. Bopp.

Kormuth is a projects-focused lawyer who has broad experience in the energy and infrastructure sectors. In 2017 and 2018, Legal 500 UK recognized Kormuth as a “next generation” lawyer for both Banking and Finance and Energy and Infrastructure. In addition, IFLR1000 identified Kormuth in 2018 as a “rising star” for project development and project finance in both energy and utilities.

“We are excited to welcome Andrej to Bracewell’s Dubai office,” said Dubai Managing Partner Christopher R. Williams. “His arrival will allow us to grow our Dubai team to greater meet the needs of clients in the region.”

“Our London and Dubai offices work very closely together,” added Jason Fox, managing partner of Bracewell’s London office “Andrej’s arrival is an important augmentation of our projects offering in the region.”

In conjunction with Kormuth’s arrival, Tom Swarbrick will join the Dubai office as senior counsel. Swarbrick is a construction lawyer with a focus on the energy sector. He represents governments, developers, funders and contractors in relation to major projects in the oil and gas and power sectors, primarily in Africa and the Middle East. Swarbrick joined Bracewell’s London office in June 2014. In 2017, Legal 500 UK recognized Swarbrick as a “next generation” lawyer for non-contentious construction work.

Bracewell’s London office was named Legal Services Provider of the Year at the 2018 Petroleum Economist Awards. In its inaugural list of Best Law Firms, The Times commended Bracewell as one of the leading firms in the UK for energy and renewables work. Chambers UK awarded the firm seven rankings in its 2019 edition, and the London team earned 13 rankings in the 2019 edition of IFLR1000 Financial and Corporate Guide. In addition, Bracewell secured 18 recommendations in the 2018‒2019 edition of Legal 500 UK.

“I’m delighted to join a firm with a strong international platform in the projects space,” said Kormuth. “I look forward to working closely with the energy lawyers in Dubai, London and across the firm in building an even stronger projects practice in the MENA region.”

In The News
Hart Energy
Oil and Gas Investor