Specifically, the Supreme Court held that the surface decorations on the cheerleading uniforms such as the ones depicted below are separable and therefore, eligible for copyright protection. 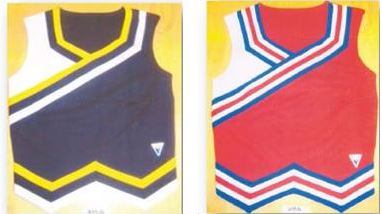 However, the Supreme Court's holding is narrow because the copyright owner only retains rights to the artistic elements.  The owner has "no right to prohibit any person from manufacturing a cheerleading uniform of identical shape, cut, and dimensions to the ones on which the patterns appear."

Supreme Court's Expansion of Copyright Protection
The Supreme Court's decision clarifies that artistic elements included on useful articles may be eligible for copyright.  In particular, it awards equal protection to works of art regardless of whether the art was first created "as a feature of the design of a useful article" or created independent of a useful article.  The Court draws an analogy between a painting of geometric patterns on a canvas, which are copyrightable, and placement of the same geometric patterns on clothing.  It states that the latter form of art should not be awarded any less protection simply because it is included on a useful article.

Additionally, the Court stated that artistic elements on a useful article need not be "solely artistic."  They are eligible for protection even if they have some utilitarian function that makes a useful article more useful.

Future Impact of the Supreme Court's Decision
The Supreme Court's decision creates an additional "arrow in the quiver" of the limited intellectual property rights  afforded to the fashion industry.  With possible rights to artistic design elements on clothing, fashion designers may better protect their designs.  Significantly, the designs need not be purely artistic; even if the design has some useful element, as long as the design is not solely utilitarian, it is eligible for copyright protection as long as it meets the other elements of the conjunctive test.