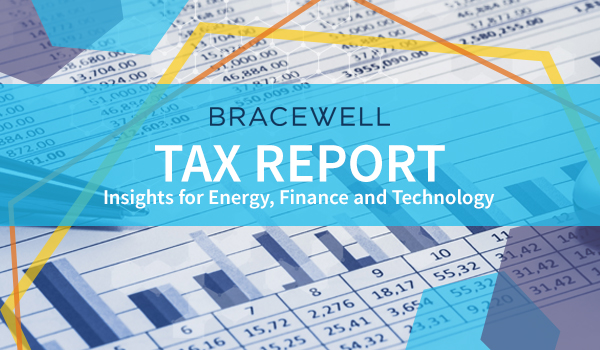 Six months after the passage of the Tax Cuts and Jobs Act (TCJA or “the Act”), tax practitioners still are analyzing the effects of the Act’s new provisions across all sectors of the economy.  This includes the financial sector, which was expected to be noticeably impacted by the new law, including by a number of new international provisions (click here for more).  These international provisions largely focused on (a) creating a territorial tax system for U.S. corporations and (b) combatting perceived abuses where U.S. taxpayers hold valuable assets offshore or make deductible payments to foreign affiliates in low tax jurisdictions.  On the other hand, many had expected to have at least one less burdensome provision following the bill’s passage, specifically what we refer to as the Borrower Deemed Dividend Rule.  However, this rule, long a headache for borrowers (and lenders, to a lesser degree) in financial transactions, still is to be reckoned with and because of changes to the CFC rules, potentially cast a wider net than ever before.  Whether it has any bite remains to be seen, as we will explore.

The Borrower Deemed Dividend Rule is a part of Section 956 of the Internal Revenue Code, which generally requires an income inclusion by certain owners of a CFC (defined immediately below) with respect to certain investments by the CFC of U.S. property.  In general, a corporation is a “controlled foreign corporation” (or “CFC”) if more than 50% of the voting power is held by “United States Shareholders” (which is defined and discussed below).  Such United States Shareholders are required to include their pro rata share of certain income of the CFC, mostly passive income, but also phantom or deemed income, under broad rules.  To wit, under the portion of Section 956 that contains the Borrower Deemed Dividend Rule, current and accumulated earnings of a CFC – up to the amount of the U.S. obligation at issue – are deemed to be distributed to its United States Shareholders if the assets of the CFC serve directly or indirectly to support the obligations of a U.S. person (as defined for tax purposes).  This rule long has been the bane of tax lawyers given its extreme breadth and little official guidance, and thus many were excited at the prospect of its repeal (discussed below).  The only specific situation the otherwise broad rule provides as meeting this test is where the CFC acts as the guarantor or pledger with respect to an obligation of a U.S. person or two thirds or more of thestock of a CFC is pledged in support thereof (which is treated as an indirect pledge of the CFC’s assets).  The policy behind such a provision likely is to prevent domestic borrowers from moving or keeping income offshore – thereby escaping U.S. taxation – while still benefiting from said income both as a means of securing a loan as well as possibly earning more favorable terms from a lender due to increased creditworthiness.  This limits the ability of foreign corporations to be co-borrowers with U.S. entities, as many credit agreement contain cross-collateralization and ratable sharing provisions that would allow a lender to a U.S. affiliate to share in payments by a CFC co-borrower – and requires lenders to accept limitations on their collateral and security packages (even with only U.S. borrowers) supporting their loan obligations with respect to the CFCs.  Typically, these limitations mirror the specific rules limiting pledges of CFC stock and disallowing CFCs to serve as guarantors.  The restrictions typically also apply to domestic subsidiaries substantially all of the assets of which consist of stock in CFCs, referred to as FSHCOs (short for Foreign Subsidiary Holding Company).  Notably, there is some disagreement with respect to whether FSHCOs may serve as guarantors, with some practitioners advocating the view that these entities should still be able to guarantee these obligations but limit recovery to the proceeds of 65% of the voting stock of the underlying CFCs subsidiaries (but not limited with respect to nonvoting stock).

Possibly due to the chilling effect Section 956 or 66% was having on financial transactions, many expected its repeal as tax reform gained steam.  Indeed, both the House and Senate bills contained provisions for the repeal of Section 956, which made sense given the shift to a territorial system of taxation (at least for domestic corporations, which going forward generally will not be subject to U.S. corporate income tax on dividends from foreign subsidiaries).  Inexplicably, however, neither of these repeal provisions made it into the final bill.  In fact, quite the opposite happened, with new tweaks to the rule contained in the TCJA acting to widen its potential applicability.

The issue is highlighted by the fact that the TCJA results in an increased number of corporations now being considered CFCs.  The first change involves a new definition of United States Shareholder.  Under prior law, United States Shareholders were defined as U.S. persons (for tax purposes) who directly, indirectly or constructively owned 10% or more of the voting power in a foreign corporation.  In a significant departure from prior law, this definition has now expanded to include U.S. persons who directly, indirectly or constructively own 10% or more of either the vote or value of the stock in a foreign corporation.  Under prior law, one or more U.S. persons could own vote and value disproportionately – including with non-U.S. persons – and not cause a foreign corporation to be a CFC.  Still, many second tier and lower foreign corporations could not escape classification as CFCs because of attribution rules that did not distinguish between vote and value (and thus a shareholder with, for example, 40% value and 5% percent of the voting stock  would be treated as owning 40% of a subsidiary and be a “United States Shareholder”).  Arguably, the new law brings all CFCs under the same set of rules by eliminating the distinction in the first instance.

However, the question arises as to whether this matters with this type of foreign parent/foreign and U.S. subsidiary structure, and the answer may be “no.”  Significantly, the rules that determine which corporations are CFCs are not the same rules that determine who is a “United States Shareholder” subject to tax on the CFC’s income, including under the Borrower Deemed Dividend Rules.  A person or entity can be a United States Shareholder that includes CFC income in its own income only by holding directly or indirectly through foreign entities the requisite amount of voting power or value.   As a result, even though tax reform now requires taxpayers to attribute “down” from foreign shareholders to determine the status of a corporation as a CFC, one still only looks “up” the chain for purposes of taxing United States Shareholders.  Consequently, causing that foreign subsidiary to be a CFC only will result in inclusion by a U.S. person that owns 10% or more of the direct or indirect foreign parent.  Thus, while a U.S. sister corporation may cause a foreign subsidiary of a foreign parent to be a CFC, such foreign parent will not be a United States Shareholder required to include the CFC’s income in its own taxable income. This may result in no practical changes for borrowers in a group with a foreign parent and a U.S. sister corporation, as the foreign subsidiary also would have been a CFC under prior law if there were a U.S. entity in the structure above the foreign parent.  (As noted, while taxpayers might have manipulated the ownership of a foreign corporation by disproportionately splitting voting power and value, this tactic would not work to avoid CFC status for any foreign subsidiaries of that foreign corporation.)

Even though the effect of tax reform seems more dire for multinational borrowers due to the last minute decision not to repeal Section 956 and an expanded definition of CFCs that captures more corporations, we can see that the practical effect may not be as significant as first feared.  However, the fact that certain entities now are CFCs when they previously were not, without any grandfathering, is cause for borrowers and lenders alike to review their facilities and determine whether collateral packages – or facilities with foreign borrowers – need revision.  For example, even in our above scenario with a foreign common parent, a U.S. investor in the foreign parent that owns more than 10% of its stock could be subject to the Borrower Deemed Dividend rule. This could occur, for example, if that foreign subsidiary, now a CFC, guarantees the debt of its U.S. sister.  Note that the Borrower Deemed Dividend Rule arises only with respect to a U.S. obligation, which may limit its application (where it already may be limited if there is no United States Shareholder being taxed under the rule), but borrowers should be cautious when making such determinations when utilizing cross border structures with U.S. guarantors.

Ultimately, we must remember that the Borrower Deemed Dividend Rule is broader than limiting pledges and guarantees, and despite tax reform that purports to limit the reach of the U.S. federal tax on corporations – it is here to stay, at least for now.