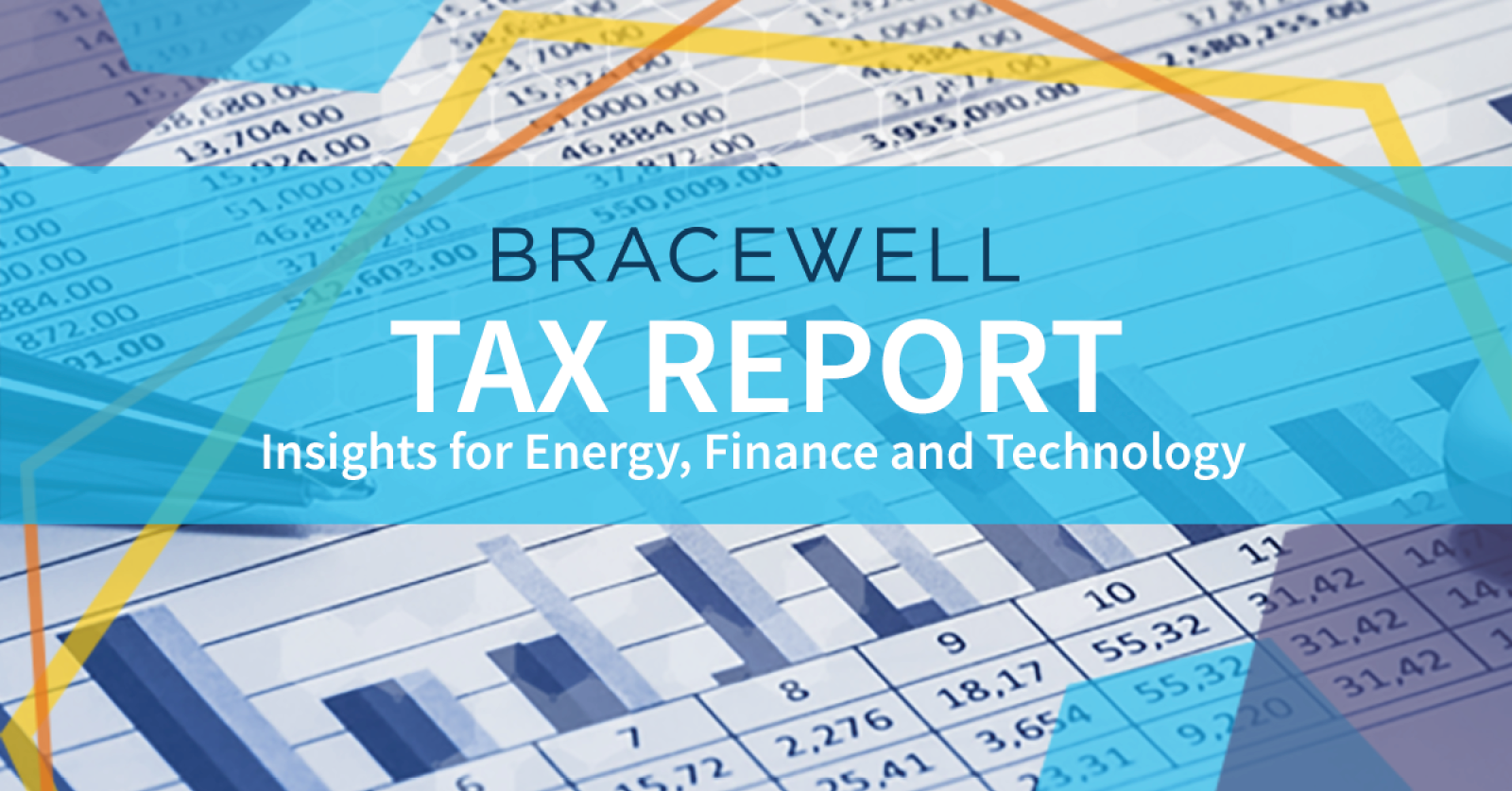 Eighteen months after the passage of the Tax Cuts and Jobs Act (TCJA or the Act), tax practitioners and taxpayers alike still are looking to Treasury for guidance to interpret and fill in gaps in the new tax laws. The hasty manner in which the TCJA was enacted resulted in new provisions that are at times confusing and internally inconsistent or at odds with existing tax laws. This is no truer than in the financial sector, which has had to weather a number of changes since the TCJA’s enactment last January (click here for more). As we discussed previously, one area of consternation has been how the TCJA dealt with controlled foreign corporations (CFCs) and the so-called “deemed dividend rule.” This rule, long a headache for both borrowers and lenders in financial transactions (click here and here for more), now potentially casts a wider net after the TCJA’s enactment, but legislators failed to extend the dividend received deduction (DRD) as a way to offset the now broader deemed dividend problem.  However, Treasury has sought to do what Congress has not, by way of the recently finalized Section 956 regulations (the Final Regulations), which, now prevent taxation of a deemed dividend to the extent an actual dividend would not be taxable as the result of the  DRD.  These welcome rules, however, still leave questions unanswered. As a result, neither borrowers nor lenders can undertake a universal approach in credit agreements and financings where limits historically have been in place to prevent application of the deemed dividend rule. However, lenders in particular are anxious to update practices to relax the limits where a deemed dividend now would not be subject to tax as a result of the Final Regulations.

Background
By way of background, certain “U.S. Shareholders” of CFCs (generally, U.S. shareholders owning more than 10% of the CFC by voting power or value) are required to include their pro rata share of certain items of the CFC’s passive income, even if an actual dividend was not paid. Included in this passive income are earnings from the CFC’s investment in U.S. property, which generally includes most obligations of U.S. persons. Where applicable, U.S. Shareholders are required to include the entire principal amount of such an obligation in income to the extent the CFC has earnings and profits (E&P). The limited guidance on how these rules apply to financings would have this result where the assets of the CFC are used, directly or indirectly, to support the obligations of a U.S. person. The only clear cut guidance in these rules provides that there will be a deemed dividend where the CFC acts as guarantor of the obligation or has in excess of 66 1/3% of its voting stock pledged as collateral therefor.

Given that the rules prohibit indirect support from the CFC, and “indirect” is not defined (other than as noted regarding guarantees and pledges), they also created risk that other typical credit provisions would trigger the inclusion. As a result, most credit agreements limit pledges of the voting stock of CFCs and do not permit CFCs to be guarantors. Further, most credits agreements will either place non-U.S. borrowers in separate facilities or contain additional, sometimes impractical limits to prevent a lender to a U.S. borrower from benefitting from payments from, or assets of, the CFC.

These rules were designed to address a perceived abuse carried out by taxpayers who were able to benefit indirectly from the CFC’s assets without causing a taxable dividend to be paid. As noted, the Act contained a 100% DRD for corporations with respect to dividends from foreign corporations. In connection with this historic change, many expected Section 956 (which houses the deemed dividend rule) to be repealed as part of the Act – particularly since both the House and Senate bills actually contained provisions repealing it. As the primary reason for the deemed dividend rule is to prevent shareholders that benefit from the use of the CFC’s assets from avoiding tax by not paying a dividend, the question arises - why would a deemed dividend be taxable following passage of the TCJA when under the same facts and circumstances the actual dividend would not be taxed due to the DRD?

It is worth noting that Section 956 will not apply to the obligations of a U.S. person if it is not (a) a domestic corporation, (b) a “U.S. Shareholder” of a CFC or (c) a partnership, estate or trust in which the CFC or a related person (as specifically defined) is a partner, beneficiary or trustee immediately after the acquisition of any obligation of such partnership, estate or trust by a CFC. However, in a typical commercial financing, the borrower likely would be a corporation or, if an LLC/partnership, the majority or sole shareholder of the CFC from which it seeks credit support; in other words, (b) would apply. The only borrowers who might escape Section 956 as drafted are individuals and non-corporate entities owning less than 10% of the CFC.

Traps for the Unwary
While the Final Regulations largely have been welcomed, there remain traps for the unwary as well as expert practitioners in the space. First, in addition to other potential limits placed on the DRD, there are technical reasons why an actual cash dividend might be taxed to a corporate parent. The most likely scenario is where the CFC has “previously taxed earnings and profits” (referred to as PTEP) as the result of shareholders including their share of the CFC’s passive income in prior years even though no cash dividend was paid.  Had the proposed rules been finalized without this being addressed, the complex PTEP rules would have prevented the application of the DRD in some or all cases. The Final Regulations change the PTEP ordering rules for purposes of determining whether the DRD applies (and thus whether there is a taxable deemed dividend). While this complex solution generally works in favor of taxpayers, it does appear to leave situations where the DRD would not apply. Presumably, in these circumstances the borrower would be unable to take full advantage of the DRD (if at all) and be taxed on the deemed dividend. Also, as referenced above, the regulations provide little relief for noncorporate borrowers that are subject to the deemed dividend rule but unable to take advantage of the DRD (to the extent of noncorporate partners).

A second question goes to the timing of the determination. Typically, a financing is tested for purposes of the deemed dividend rule at the time of closing/funding, causing some credit agreement provisions to run afoul of the rule even though not yet triggered. For example, under a typical collateral adjustment mechanism, in an event of default all of the debt (and assets) of U.S. and non-U.S. co-borrowers are aggregated and each lender gets a share of the all borrowers’ assetsl. This could result in a deemed dividend when the agreement goes into effect, regardless of whether the borrowers actually ever default. Similarly, a CFC springing guarantee, effective upon default, would trigger the inclusion immediately even if the CFC never makes a payment. The fact that the support is available in the event of a default appears to be the situation that the deemed dividend rules were intended to address. However, nothing in the Final Regulations guides us as to the timing of the DRD determination as it relates to whether the deemed dividend could be triggered in a later year. In other words, if there is no known limit on the DRD for year 1, when the borrowing occurs, is that the end of the inquiry? Or, as Treasury likely would posit, is the risk ongoing and the deemed dividend can be triggered in any year to the extent the DRD does not apply?

The need for an answer to this question goes to the heart of how to handle the related credit agreement provisions. For example, some practitioners are dropping the limits where there is a U.S. corporate borrower. This makes sense to the extent that there is no clear limit on the availability of the DRD. Others leave the limits in, with a qualifier such that the limits apply only if and to the extent the pledge or guarantee would cause (or would be reasonably expected to cause) a material adverse tax result. Still others make no changes, given that many borrowers and lenders are loathe to have fluid collateral arrangements based solely on legal risk. Alternatively, there might be a mechanism whereby the limits spring into effect in any year where the borrower (or lender) reasonably believes that the DRD would not be available. That may be difficult to achieve, as the timing of determining the applicability of the DRD in the context of a potential deemed dividend may not allow the parties to “undo” pledges, guarantees and other collateral arrangements in time to avoid the deemed dividend tax.

Note that the deemed dividend is a one-time tax to the extent the CFC has E&P (though the tax can be spread over years if there is insufficient E&P in the year the deemed dividend is triggered). Thus, even if the DRD is only available to partially offset a deemed dividend in a particular year, it would reduce the amount subject to tax in a later year. Moreover, an inclusion resulting from a PTEP issue may be minimal compared to requiring inclusion of the full amount of the debt; the latter is the draconian result that borrowers and lenders both are eager to avoid. The potential for this material adverse result  could be a reason not to simply leave the limits in without regard to the Final Regulations. However, as the rules go into effect, we may see only incidental inclusions that, in the ordinary course, are not sufficient to warrant the traditional limits. Of course, this may vary greatly by borrower and a broad market practice may not develop as a result.

Overall, the Final Regulations yield the right result as a substantive matter. However, the practical effect of these regulations and other developments, including the recently issued final temporary regulations aimed at addressing potential abuse with respect to the DRD, on financing transactions remains to be seen.