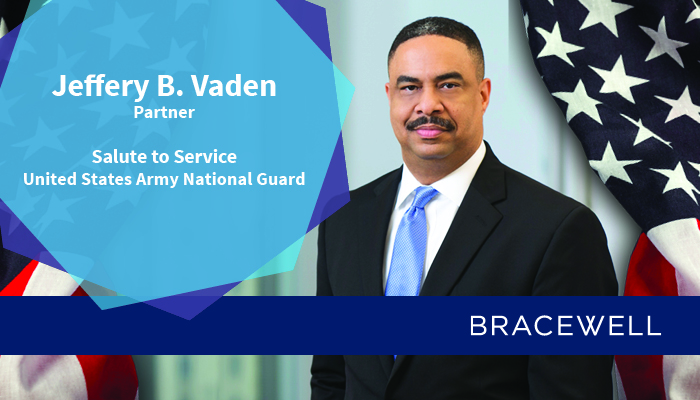 In a week-long Salute to Service, Bracewell presents a series of stories from across the various sectors of military life. We open with a feature on Partner Jeff Vaden, who served in the Army National Guard.

Bracewell Partner Jeff Vaden fondly remembers the National Guard Armory in his hometown of Sulphur Springs, Texas. Little did he know in high school that it was going to be his primary base after joining the Army National Guard, where he served from 1985 to 1991.

Jeff was assigned to a mechanized infantry unit and went through US Army Infantry School at Fort Benning.

“That was certainly a leadership and confidence building experience,” said Jeff about his time in Infantry School.

Leadership and confidence were Jeff’s guiding traits in the Army National Guard. They also characterize his service as a prosecutor for more than 16 years and in his current role as a white collar defense lawyer. Prior to joining Bracewell, Jeff was an assistant US attorney in the Southern District of Texas and assistant district attorney in the Harris County District Attorney’s Office.

As a former prosecutor and a current white collar defense attorney, Jeff sees some parallel benefits to military service and being a lawyer.

For many lawyers with government experience, particularly federal prosecutors, there is a fair number of those who get recruited from the Judge Advocate General’s Corps or JAG Corps of the various branches of the military.

So many people in our society, including in the legal field, have served in some branch of the military. Jeff says it is that shared experience that allows him to have a deeper understanding of those people. His time in the National Guard has also aided him in dealing with foreign law enforcement counterparts from outside the United States, especially with counter terrorism, national security and international issues.

“We have laws preventing the military from getting involved with law enforcement matters,” explained Jeff. “But when you deal with some foreign countries, the military is the police in certain circumstances. So my time in the National Guard has really helped me in understanding those relationships.”

Even when reading an investigative report or an article that has military or intelligence aspects, Jeff says he understands it better than if he did not have the military experience. This serves to add another commonality among the military and working in law.

“For many people, the military helps to defray your educational costs,” said Jeff. “You can use those benefits not just for an undergraduate education, but you can extend to post-graduate work as well.”

Jeff is thankful for the knowledge and experiences gained in his time with the National Guard, but he also understands that not all military service is the same.

“There was no active conflict when I served, so I did not get deployed,” Jeff added about his years in the National Guard. “I hold those who did deploy in combat in the highest regard.”

Jeff served in the National Guard during the mid-1980s. Despite this being a period of elevated Cold War tension between the United States and the Soviet Union, the decade was a time where the US was not engaged in any large-scale fighting. This was the post-Vietnam era and just prior to the Gulf Wars.

A self-proclaimed military history buff, Jeff has a deep appreciation for those veterans of foreign wars. For Jeff, Veterans Day has always held a special place in his heart.

“I have always been pro military even before my time in the service,” relished Jeff. “Each Veterans Day we put the flag up in our yard, it is such a special day.”