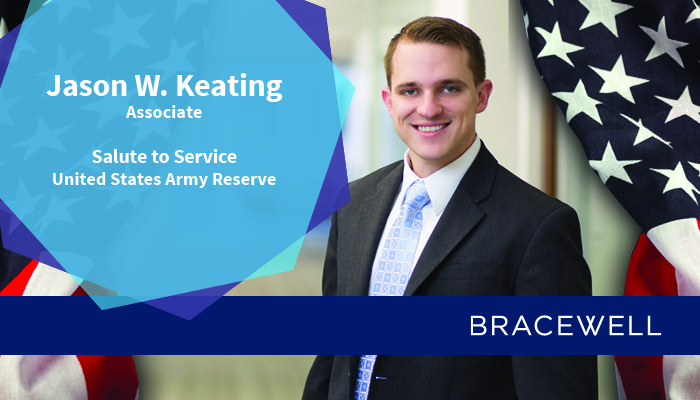 Bracewell concludes its week-long Salute to Service series with a feature on an active-duty Army Reserve Captain.

Jason Keating is an associate in Bracewell’s business and regulatory section. But for one weekend a month and approximately two weeks over the summer, Jason serves as a Captain in the United States Army Reserve.

Jason enrolled in Army ROTC as an undergraduate at the University of Delaware, and has served as an Army Reserve officer for the last nine years.

“I am blessed and very grateful that the firm supports my military service and allows me to make the time commitment to attend my monthly drill weekends and annual trainings,” said Jason.

Jason is in command of a petroleum supply company consisting of approximately 120 soldiers. The company’s doctrinal mission is to mobilize into an austere environment in order to construct, install and operate a petroleum pipeline to support the transportation of fuel. If the assets already exist, the unit might move in and take over operation of that pipeline. 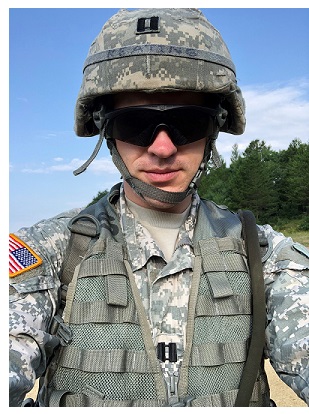 “There are a limited number of units across all echelons of the Army (Active, Reserve and National Guard) that perform this type of mission,” explained Jason. “So we are very valuable to the Army as a whole in terms of being an organic asset with a unique skillset of performing petroleum pipeline operations.”

This past August, Jason and his company took part in a large-scale exercise at Fort McCoy, which is a training installation in the vicinity of Sparta, Wisconsin. For its part of the exercise, the company got on the ground and moved out into an open field where there was no existing infrastructure. The company lived there organically using the equipment and supplies it had on hand, while proceeding to execute its mission: constructing and installing a pipeline with the support of adjacent units.

Jason’s company is trained and equipped to handle a variety of different mission sets. As an example, the company could be asked to construct and operate a single pipeline that would move petroleum directly from a supply point to the maneuver units that require it, such as the infantry, armor or artillery. The company could also construct and operate single or multiple pipelines used as links in a chain to move petroleum from supply point to supply point – with the ultimate goal of getting the fuel into the hands of the end user. For this exercise, an engineer company began by digging trenches. Upon completion, Jason’s unit was able to move in with their equipment and install a pipeline to be used to move petroleum from a staging area to a collection point. While the unit did not actually transport fuel for purposes of the exercise due to environmental considerations, they did test the operation and functionality of the line by transporting water through it, and separately ran lab tests on provided samples of fuel.

“It was great experience for me and I look forward to doing future exercises like that again,” added Jason.

What makes this exercise so valuable to Jason’s law practice is that he represents lending institutions, money center banks and regional banks in a wide array of financing transactions, including energy securitizations and project finance. Being based in the Houston office, these transactions frequently involve the development and exploration of oil and natural gas.

“It is unique for me to be able to work on so many energy and oil and gas transactions as part of my practice here at Bracewell, and then ultimately see how the development of that petroleum and fuel translates into utilization at the customer level,” described Jason. “This is especially true with the Department of Defense, which is one of the largest purchasers of bulk petroleum product in the US.”