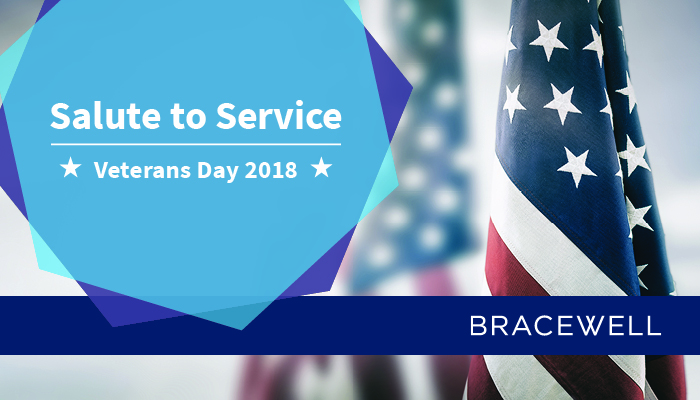 Bracewell LLP lawyers have a long history of military service and support that dates to the founding of the firm.

Searcy served on General George S. Patton’s staff as a supply officer in the Army, and Fentress served in the Navy during World War II.

This lineage of service to country continues today at Bracewell. In celebration of Veterans Day 2018, we showcase some of the lawyers at the firm today who have served or who currently serve or support the nation’s military.

Houston Of Counsel Robert L. Clarke served in a US Army Intelligence Branch (1966-1968) in Houston, Texas.

Washington, DC Of Counsel Gene E. Godley and Dallas Partner Christopher D. Olive each served in the US Army Judge Advocate General’s Corps. Gene was a Captain who served at Fort Hood, Texas, in 1964. Chris, who was also a Captain, served in the Republic of South Korea from 1996 to 1997 and at Fort Carson, Colorado, from 1998 to 2000.

Houston Partner J. Clifford Gunter III was a Lieutenant in the US Navy Judge Advocate General’s Corps in 1967.

The Judge Advocate General’s Corps or JAG Corps is a specialty within each branch of the military concerned with military justice and military law. Officers serving in a JAG Corps are called Judge Advocates and serve primarily as legal advisors to the command to which they are assigned.

Houston Partner Jarvis V. Hollingsworth graduated from the US Military Academy at West Point (1981-1985). He went on to do active duty tours with the Army in Oklahoma, Texas, California and Germany (1985-1990). Jarvis was a Field Artillery Officer–Army Parachutist, Army Air Assault qualified and served Aide-de-Camp to a Reserve Major General. He retired as a Captain.

Seattle Associate Tyler S. Johnson is a former Naval officer (2000-2007) who served aboard the USS Louisville (SSN 724) based out of Pearl Harbor, Hawaii. While aboard this Los Angeles-class submarine, he operated a nuclear power plant and conducted ship-board operations. Ty also did a tour at the Naval Base Kitsap located on the Kitsap Peninsula in Washington State.

Houston Associate Jason W. Keating enrolled in Army ROTC as an undergraduate at the University of Delaware, and has served as an Army Reserve officer for the last nine years.

Houston Partner Albert B. Kimball was a platoon leader in the US Army (1962-1964) and was stationed in Germany.

Dallas Partner Alfred G. Kyle served active duty in the US Marine Corps from 1988 to 1991 and was in the Reserve until 1995. Al was also part of Operation Desert Storm in 1991.

New York Associate Paul M. McBride graduated from the US Military Academy at West Point in 2001 and served six years (2001-2007) as an active duty Army officer. While on active duty, he served with units located in the United States and Europe, and completed a one-year deployment (2005-2006) to Afghanistan as a member of the 173rd Airborne Brigade Combat Team.

Prior to his legal career, Houston Senior Counsel Simon Stevens served as a sergeant in the US Army (1989-1995).

Houston Partner Jeffery B. Vaden served in the Army National Guard (1985-1991) and was part of a mechanized infantry unit.

Others noted for their service include New York Partner Erin S. Hennessy, who was awarded the Outstanding Civilian Service Medal (2010 and 2018) and the Commander’s Award for Public Service (2011 and 2016). The Outstanding Civilian Service Award is the third-highest honor within the public service awards scheme of the Department of the Army that can be awarded to a private citizen. Houston Associate Yeon Jae Ko served in the Republic of Korea Navy as a commissioned officer.

In honor of Veterans Day 2018, Bracewell offers a heartfelt “thank you” to all who have served.