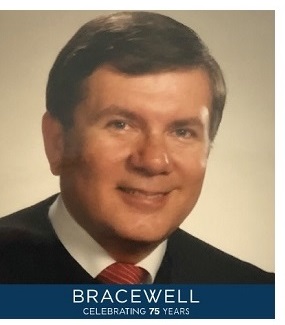 Every year since 1961, the United States has observed Law Day on May 1 to reflect on the role of law and its social importance. This year, as we look back at our 75 years as a firm, we find inspiration from Eugene Cook (1938–2020), who in 1997 published an Op-Ed in The Dallas Morning News about the contributions made by lawyers throughout US history.

Cook served as a Justice on the Texas Supreme Court from 1988 to 1992, serving as the principal architect of “The Texas Lawyer’s Creed—A Mandate for Professionalism.” Cook joined Bracewell in 1992 as a senior partner and head of the firm’s appellate group. He retired in 2002.

“The first thing we do, we kill all the lawyers.” When William Shakespeare’s Dick the Butcher speaks those lines, he is recognizing that to overthrow a legitimate government, it is necessary to kill those who oppose tyranny: the lawyers. But despite their meaning, the lines usually are taken out of context and employed as the favorite jest of lawyer bashers everywhere.

No one, it appears, likes lawyers. Lawyer bashing is a national pastime, the theme of regular articles and letters to editors, the punch line of countless jokes and a sure-fire ratings booster for radio talk-show hosts.

Despite those insults, I am proud to be a lawyer. I know what many members of the public apparently don’t: History is filled with generations of lawyers who, like those Dick the Butcher would exterminate, have stood against tyranny to build a free society.

Of the 56 men who signed the Declaration of Independence, 30 were lawyers. The author, Thomas Jefferson, was a lawyer. Of the 55 delegates to the Constitutional Convention in Philadelphia who hammered out our Constitution, 31 were lawyers.

A few years later, during the War of 1812, the British invaded and captured the nation’s young capital. A Washington citizen went on board a British ship to secure the release of a US prisoner.

The young Washingtonian maintained an all-night vigil aboard the vessel while the British relentlessly bombarded Baltimore.

Generations of Americans know the triumph he felt when he saw, in the dawn’s early light, that the flag was still there. He was Francis Scott Key, author of “The Star-Spangled Banner,” and he was a lawyer.

Lawyers were no less active as leaders during other challenging periods of American history. Who among us can remain untouched by the work — and the words — of Texas’ own Barbara Jordan during Watergate? “My faith in our Constitution is whole. It is complete. It is total.”

Ms. Jordan wasn’t the first Texas lawyer to defend the cause of freedom. More than 150 years ago, six stubborn lawyers fortified themselves with more than 180 other souls to defend the Alamo against impossible odds.

William B. Travis, commander of the Alamo, was only 26 when he wrote an open letter to the people of Texas and all Americans, promising that he would “never surrender or retreat.” What most people don’t know is that Mr. Travis had a law practice in Anahuac and, later, San Felipe before he sacrificed his life at the Alamo.

The colorful James Butler Bonham was 29 when he died at the Alamo. Long before he traveled there, he achieved fame as a spirited lawyer in South Carolina. One day at court, another lawyer insulted Mr. Bonham’s female client. Mr. Bonham interrupted the proceedings and took a buggy whip in court to the surprised opponent. Mr. Bonham’s subsequent jail sentence was relieved by the ladies of the town, who saw to it that he was well fed and outfitted with whatever comforts his jailers would allow.

Mr. Bonham’s reckless courage later made him a natural choice to ride through enemy lines in search of reinforcements for the besieged Texas forces. He fought his way through a blistering assault to return to the Alamo. Once back inside, Mr. Bonham manned a cannon. Rumor has it he died trying to explode its powder magazine to keep it from falling into enemy hands.

As Americans and Texans, we have only to look back through our own history to find portraits of honorable men and women who have served the society as lawyers. We have only to picture the Alamo and then, 46 days later, the Battle of San Jacinto and the commander who led Texas to victory in the war’s decisive battle. He was Sam Houston, a courageous man, a hero committed to building a strong and free society, a capable leader. But first, he was a lawyer.

Disreputable lawyers are justly criticized. The public, as well as the legal profession, are well served by their exposure. But they aren’t the whole story of the legal tradition. That tradition has been built by the men of the Constitutional Convention, our country’s presidents and other leaders and by the people laboring within the legal profession today. For every charlatan, we can find a dozen honorable lawyers to offset the jokes and the negative reports.