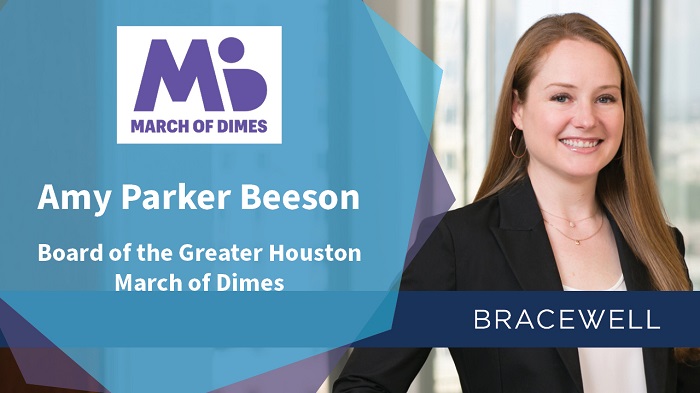 This November, Bracewell Trial Partner Amy Parker Beeson was honored with the distinction of being appointed to the Board of the Greater Houston March of Dimes. Amy’s new leadership role with the March of Dimes recognizes her longstanding dedication to the organization’s mission of ensuring that every baby has a fighting chance at a full and healthy life. Amy’s passionate commitment to the March of Dimes is also deeply personal.

Back in September 2016, Amy and her husband, Michael, were raising seventeen-month-old son, Teddy, with twin boys on the way. Amy had a thriving litigation practice and was on the verge of being elected to the firm’s partnership. This is when life suddenly took a dramatic turn.

Despite Amy’s uncomplicated and healthy pregnancy, her twins, Jack and George, were born at just 28 weeks. The pair would spend 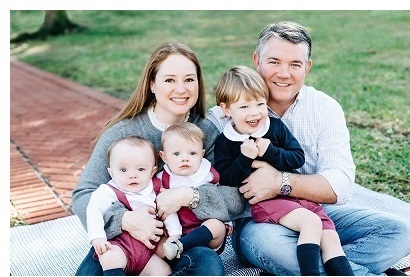 the next 125 days fighting for their lives in the Neonatal Intensive Care Unit (NICU) at Texas Children’s Hospital. Although both boys were born with relatively few complications, things quickly changed once they were admitted to the NICU. Jack was less than two weeks old when he developed a severe methicillin-resistant staph infection that spread to his fragile lungs and nearly robbed him of his life. George was diagnosed with the same frightening infection weeks later. There were many times Amy and her husband feared they might lose them both.

“I was at their bedside 24 hours a day for nearly four months working with their medical team and praying for a miracle,” said Amy. “We never gave up hope, and somehow, by the grace of God and with the help of our incredibly talented physicians and nurses, we were finally able to all go home together. The pride I felt walking in our front door with both boys is something I will never forget and a blessing for which I will always be eternally grateful.”

As it would happen, one of Amy’s greatest professional achievements coincided with this remarkable personal triumph. Amy made partner while keeping vigil at the twins’ bedside.

Her twins’ early arrival and their heroic battle have inspired Amy to give back to the organizations that helped save their lives. She is a member of the Texas Children’s Ambassadors and sits on the Newborn Center Family Advisory Committee, which supports parents of critically ill infants and helps the hospital develop better family-centered care policies.

Amy has also been an advisor to the March of Dimes and a dedicated member of its Family Network since the day the twins came home. In 2019, she was invited to join the March of Dimes’ Executive Leadership Team to help build corporate partnerships to support 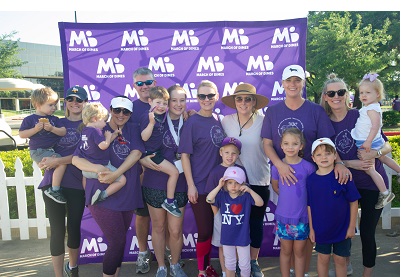 the Houston March for Babies. In the past two years, Amy has raised nearly $50,000 for the March of Dimes through her tireless fundraising efforts. She built partnerships with local children’s boutiques in Houston and San Antonio, forged a relationship with philanthropic powerhouse Kendra Scott, and helped raise awareness and funding by bravely sharing the twins’ story. Her March for Babies team, aptly named “Team Jack and George,” was the number-two fundraising family team in Houston this year and number seven in the country.

“I am so proud of what we have been able to accomplish,” explained Amy, “And I am so grateful to everyone on Team Jack and George for giving me the opportunity to give back to an organization that has meant so much to our family.”

The funds Amy raised largely came from smaller donations and a great deal of hard work.

“One of the things I love most about the March of Dimes is its strong conviction that powerful changes can come from small acts of generosity. The organization’s history is marked by its massive success in developing a vaccine for polio shortly after millions of school children sent dimes to the White House to celebrate President Roosevelt’s birthday. It’s inspiring.”

Amy’s passion for the March of Dimes has spread to her close-knit Bracewell family. Her impact is visible around the firm, and its magnitude can be seen by the large number of donor circles that line her door and are posted around her office. 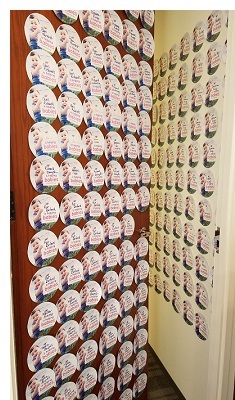 This year alone, Amy has raised over $7,000 from individual donations from more than 50 Bracewell lawyers, staff, and alumni.

And how is Amy able to do all the fundraising, have a successful practice and care for her family?

“Dedication. You have to have the dedication,” Amy said. “Especially with Jack still facing so many health hurdles.”

Jack’s battle with prematurity is far from over. He suffers from a complicated case of hydrocephalus and has had 16 brain surgeries in his young life. As a result, Amy is also a strong supporter of the Hydrocephalus Association. She lent Jack’s story to support the organization’s nationwide #NOMOREBS campaign this fall and dedicated the twins’ third birthday to raising critical research funds.

The Beesons’ march for life continues and for all who follow in their same footsteps.